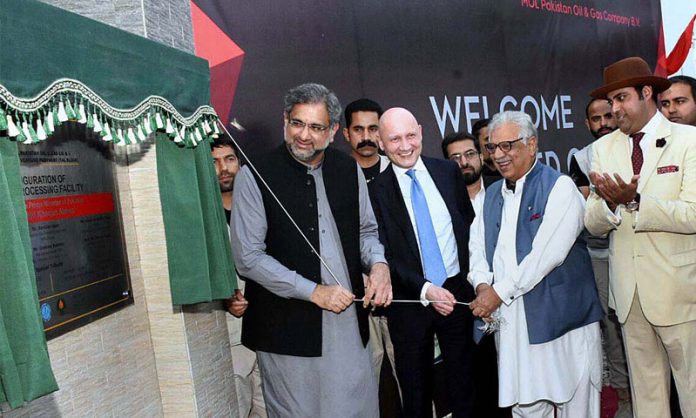 The prime minister was addressing a ceremony here after inaugurating a US$ 150 million Tolanj Gas Processing Plant that will produce 20 million cubic feet gas per day besides contributing 31 million dollars revenue annually to the national kitty.

The processing facility was commissioned on December 5, 2017.

It had commenced production from Tolanj X-1 and Tolanj West-1 gas wells in Kohat, a leap step forward towards making Pakistan self-sufficient in energy sector.

The prime minister lauded MOL Pakistan’s support in meeting Pakistan’s energy requirements besides its valuable contribution towards investment and generating employment opportunities in the country.

The gas processing facility will immensely help make a direct positive effect on the overall industrial growth, development of infant industries and socio-economic conditions of people of this region.

He said Tolanj gas facility being a classic example of public-private partnership was a major headway in meeting the growing energy demands of people and industries of Pakistan.

The Prime Minister said Pakistan was making great progress in all spheres of life due to his government’s prudent economics and energy policies and the long inherited problem of load shedding was successfully addressed.

He recalled that when the present PML-N government took over in 2013 the country was facing acute gas and electricity shortages, adding, but now every sector including the domestic consumers as well as the industry were getting gas supply.

Similarly, the Prime Minister said the issue of electricity shortages had also been addressed to a large extent due to the government’s efforts.

He said the government was encouraging business groups, corporate entities and foreign investors to take full advantage of the facilities offered by his government and bring investment in Pakistan.

The Prime Minister said Tolanj gas processing facility was the largest gas project in Khyber Pakhtunkhwa province and would help better the gas supply in the area.

He appreciated MOL Pakistan for heavy investment in the country and making this project a success story, which he termed as a “win-win” for all. It was an efficient and modern plant, he added.

The Prime Minister hoped that the other companies would also benefit from the MOL’s successful experience and ventures in Pakistan. He further hoped that MOL would continue to invest in Pakistan.

He also thanked the Governor KP as well as the provincial government for their cooperation in the project.

Dr Berislav Gaso, Executive Vice President Upstream MOL Pakistan said his group has already invested over one billion dollars in oil and gas sectors in Pakistan and its direct subsidiary oil and gas companies are working in this country since 1999 and are significantly contributing in the development of Pakistan.

For nearly two decades, he said, MOL Pakistan was playing a pro-active role in Pakistan Oil and Gas sector and has been contributing through its funds in order to help mitigate the problem of energy shortfall.

With the launch of Tolanj facility, he said, we are looking forward to make more  large-scale investment in this country with cooperation of Government of Pakistan.

He said inauguration of the Tolanj facility was a great achievement and historic day for people of KP especially for Kohat.

Graham Balchin, CEO MOL Pakistan said the plant has successfully started operation after thorough inspection and re-testing of its all components.

He said these measures have given immense confidence to all stakeholders for safe, sustainable and long term operations of this plant and commended teams and engineers for its successful operations.

The Prime Minister, who was accompanied by Governor Khyber Pakhtunkhwa, Engr Iqbal Zafar Jhagra formally inaugurated the plant by unveiling the plaque.

Senior officials of the Ministry of Petroleum and Natural Resources, Islamabad and MOL Pakistan were also present on the occasion who briefed the Prime Minister about salient features of this gigantic project.

Earlier upon arrival in Kohat, the Prime Minister was warmly received by Governor Khyber Pakhtunkhwa Engr Iqbal Zafar Jhagra and other senior officials of the Ministry of Petroleum and Natural Resources and MOL Pakistan.