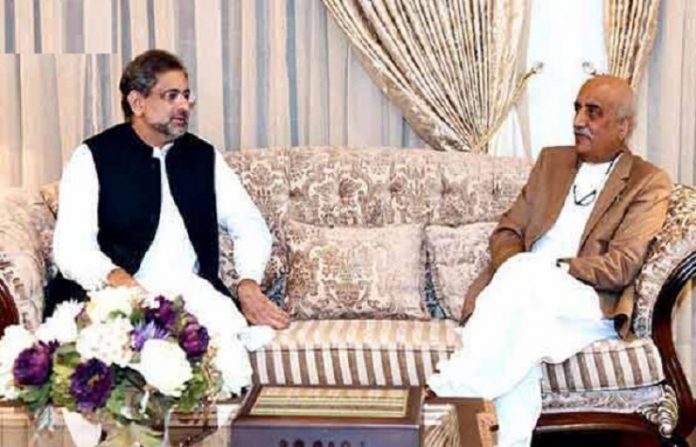 The outgoing government has no right to present a budget for the upcoming fiscal year, Opposition Leader in the National Assembly Khursheed Shah told Prime Minister Shahid Khaqan Abbasi in a meeting on Wednesday.

“We are trying that a name for the caretaker prime minister be finalised before May 16,” he said.

While talking to the media, Shah admitted that he suggested to dissolve the government a day before the end of its tenure.

The prime minister, however, rejected the suggestion and vowed to hold a session of the assembly even on last day of the government’s tenure, Shah clarified.

Later in the day, Khursheed Shah called on Pakistan Tehreek-i-Insaf’s Shah Mahmood Qureshi. Qureshi ageed that there is no logic in presenting a budget for an entire fiscal year when the government is set to dissolve before June.

Earlier on Tuesday, former Senate chairman Raza Rabbani had also expressed reservations over the government’s intention to present the federal budget for the next financial year.

By doing so, he said, the government would give an opportunity to the caretaker set-up to prolong its tenure having one year fiscal budget in its hands. He had wondered which hidden hand was compelling the government to go for this exercise when its term was to expire on May 31.

He added that the Constitution provides that the interim government could get its budget approved up to a period of four months. He said he was at a loss to understand why the PML-N was allowing this sword to permanently hang over the nation’s head.