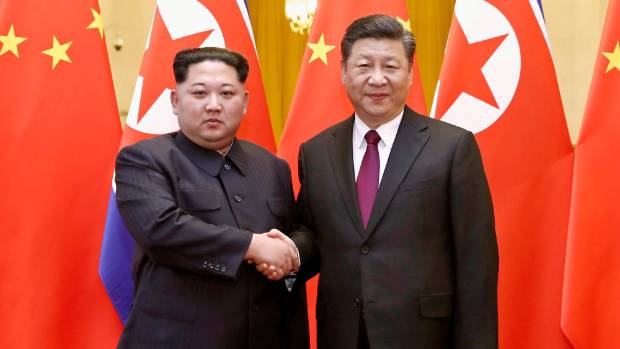 North Korean leader Kim Jong Un was treated to a lavish welcome by Chinese President Xi Jinping during a secretive trip to Beijing as both sides seek to repair frayed ties ahead of landmark summits with Seoul and Washington.

On his first trip abroad since taking power, Kim and his wife were met with honor guards and a banquet hosted by Xi, according to state media, which confirmed the visit on Wednesday only after Kim had returned to North Korea.

The North’s state-run radio station confirmed Kim was invited by Chinese President Xi Jinping, who reportedly accepted a request to visit the North at his convenience.

The two men held talks at the imposing Great Hall of the People during which they hailed their nations’ historic relations, with Kim pledging that he was “committed to the denuclearisation” of the Korean peninsula, according to China’s Xinhua news agency.

“There is no question that my first foreign visit would be to the Chinese capital,” Kim said, according to North Korea’s official KCNA news agency.

“This is my solemn duty as someone who should value and continue the DPRK-PRC relations through generations.”

KCNA said Xi accepted an invitation to visit Pyongyang, which would be his first trip to the North Korean capital since he took power in 2012.

The two men had not met since Kim took over after the death of his father, Kim Jong Il, in 2011, but Xi underscored the importance of developing ties, saying it was “a strategic choice and the only right choice,” according to Xinhua.

Meanwhile, the South’s presidential office was notified by China in advance of Kim’s trip, according to an official cited by local news agency Yonhap.

Both Seoul and Washington had been cagey in response to this week’s media speculation, refusing to verify the story.

A White House statement released after Wednesday’s confirmation revealed that China had also briefed the U.S. on Kim’s visit, celebrating the communication as “further evidence that our campaign of maximum pressure is creating the appropriate atmosphere for dialogue with North Korea”.