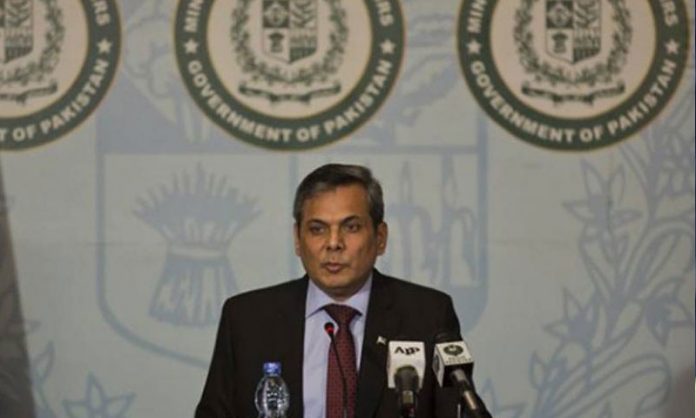 ISLAMABAD: The Foreign office Thursday said the terrorists’ outfits in Afghanistan are not only threat to Pakistan but for the entire region and cooperation between Pakistan and Afghanistan is imperative for regional peace.

The spokesperson Nafees Zakriya in Weekly Press Briefing here said the Chief of Army Staff’s visit to Kabul accompanied by DG ISIS and foreign secretary has been significant.

“They held meetings with Afghan President Ashraf Ghani and other senior civilian and military officials during which the defense cooperation and other important issues have been discussed”.

He said that Pakistan has offered Afghanistan to conduct training in counter terrorism operations and border management.

Spokesperson said that Foreign Minister Khawaja Asif is currently undertaking his first bilateral visit to the US at the invitation of Secretary of State, Rex Tillerson to review and discuss the bilateral relationship and regional security situation, including Afghanistan and deteriorating Pakistan-India relations.

India is a blatant violator of International law. “Indian occupation forces continue to violate ceasefire on Line of Control (LOC) and deliberately target civilians”, he said.

He said that Indian move to keep LoC a burning issue was primarily to hide the crimes against Kashmiris its forces were committing in IoK.

Replying to a question he said that India always leveled baseless allegations on Pakistan to divert world’s attention from the atrocities and state terrorism it was carrying out in occupied Kashmir.

“Indian irresponsible and hostile behavior is endangering the peace and security of the region and beyond. During 2017, India committed around 1000 ceasefire violations and its targeted attacks on Kashmiri civilians in AJ&K and in the vicinity of Working Boundary has resulted in the Shahadat of 45 civilians and injuries to 155, which included children and women”, he informed.

Replying to a question about Indian aggression on LOC, he said that India was committing crimes in systemic manner. It wants to engage Pakistan regionally to divert its attention from the diplomatic front on Kashmir issue where Pakistan is making progress, he added.

He said that Indian crimes against unarmed Kashmiris, who are seeking their right to self-determination, as promised to them in the UNSC Resolutions on Kashmir dispute, warrant strong punitive actions against              India.

He said UN, OIC, UNHCR and many others human rights activists have been asking India to grant the access to occupied Kashmir for investigation proposes but India has always denied it.

Replying to another question, he said that Pakistan has been carrying out various counter terrorism operation to maintain peace in the country and also in the region. “It is India who is using afghan soil  with the help of its nexus comprising RAW and terrorist outfits to carry out terrorist activities inside Pakistan, capturing and confessions of spy commander Kalbhushan Yadav remains no secret”, he said.

Terming India’s involvement in Baluchistan as “Economic terrorism”, Spokesperson said that India was involved in sabotaging the peace of the province to create a setback for CPEC which is going to be the economic hub of Pakistan in future.

He said Amnesty International’s recent report on pellet gunshot victims is one of many other heinous crimes being committed by Indian forces in IoK on daily basis. “Besides killing Kashmiris in thousands of fake encounters, Kashmiri leaders have been penalized with death sentences and life incarcerations on trumped up charges through flawed judicial trials. Case of Dr. Muhammad Qasim, is among many cases of miscarriage of justice”, he added.

Replying to question about Iranian move on the border area he said that Pakistan has taken up the issues with Iran and there was no miscommunication between the two countries over the issue.

He informed that Japanese high level delegation visited Pakistan for the 10th round of political consultations, held at the Ministry of Foreign Affairs.