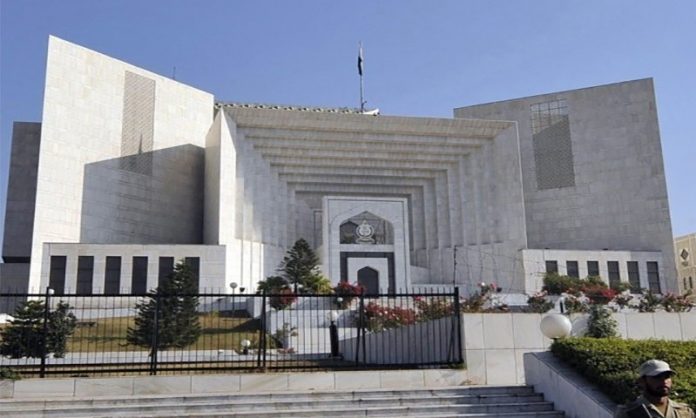 ISLAMABAD: The Supreme Court on Monday ordered that the six JIT members be provided foolproof security and job security.

These directions were made by the bench headed by Justice Ejaz Afzal Khan and also includes Justice Sheikh Azmat Saeed and Justice Ijazul Ahsan while receiving the final report from the JIT here.

Earlier in the day, the JIT members held what would be their last session at the Federal Judicial Academy and reviewed the final report of their investigation.

The JIT, formed on May 5 in light of the Supreme Court’s April 20 judgment, was tasked to ascertain the money trail of the Sharif family-owned properties in Park Lane, London.

The members of the high-profile probe team were busy over the weekend preparing the report, according to sources.

Moreover, the same bench will indict Senator Nehal Hashmi for contempt of court over his controversial remarks. The apex court had taken suo motu notice of Hashmi’s speech which went viral on May 31 wherein he threatened ‘those investigating the PM’s family’.

The Supreme Court has ordered the registration of FIR against Security and Exchange Commission of Pakistan (SECP) chairman for tampering with official records.

The FIA had submitted to the court the report on its inquiry into the SECP’s alleged record tampering over the weekend.

The FIA had identified SECP Chairman Zafar Hijazi as the culprit behind changing official records of the Chaudhry Sugar Mills, owned by the Sharif family, to help their case.

Regarding Hussain Nawaz’s plea to the bench to form a judicial commission into the leaking of his JIT interrogation picture, the bench observed that the the government may form a commission on the issue if it wants to.

Justice Ejaz also ordered that the person who leaked the picture should be identified. The JIT had earlier informed the bench that the person responsible for leaking the premier’s son’s picture had been sent back to his parent department where appropriate action was taken against him.

Taking notice of news reports published in the Daily Jang and The News, the bench issued contempt of court notices to Jang Group’s Editor in Chief Mir Shakil-ur-Rehman and Publisher Mir Javed Rehman. The three-member bench has sought a clarification within seven days.

The bench also issued a show-cause notice to The News’ reporter Ahmed Noorani.

The apex court has adjourned hearing of the case till July 17.

Heightened security ahead of report submission

Authorities issued a red alert for the federal capital’s Red Zone, where the Supreme Court is located, and strict security measures were in place in light of the JIT’s report submission.

Additional contingents of police and Rangers were deployed both inside and outside the Supreme Court premises, officials said. Islamabad SSP security said around 500 police personnel have been deployed for security duty in and around the apex court.

Authorities feared the law and order situation could deteriorate in case supporters of both Pakistan Muslim League-Nawaz (PML-N) and Pakistan Tehreek-e-Insaf (PTI) amass at the venue.