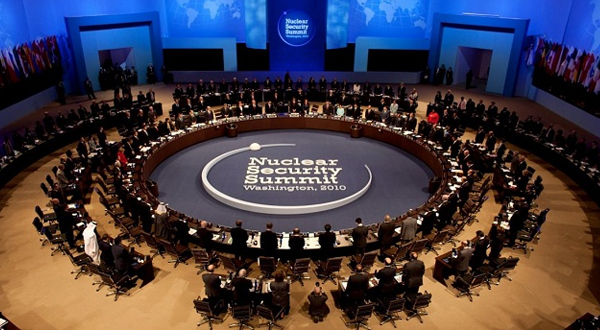 North Korea’s threats following the January detonation of a nuclear device and a long-range rocket launch a month later, are expected to feature prominently in both meetings.

The White House wants to keep up pressure on the North Korean regime, increasing the economic and diplomatic cost of ignoring international appeals to mothball its nukes.

“The international community must remain united in the face of North Korea’s continued provocations,” Obama wrote in an article published on the eve of the summit.

“The additional sanctions recently imposed on Pyongyang by the United Nations Security Council show that violations have consequences.”

Obama, Abe and Park are likely to call for the rigorous implementation of those sanctions and discuss the possible deployment of US missile defense systems in the region.

“I think the three leaders will clearly demonstrate their unity in our commitment and our firm resolve to deter and defend against North Korean aggression,” said Dan Kritenbrink, a top Obama advisor on Asia.

Obama will later meet Xi, his only fully-fledged bilateral meeting with the dozens of world leaders coming to Washington.

Obama will also hold what the White House is calling a “brief” meeting with France’s President Francois Hollande.

China is seen as key to making sanctions against North Korea bite.

But Washington believes that China could more forcefully wield its influence over Pyongyang, including encouraging its Stalinist neighbor to tone down destabilizing rhetoric.

Tensions are only expected to rise in advance of a major Communist Party Congress in North Korea in May.

China also has its own concerns about the deployment of THAAD so close to its own territory, fearing it may weaken Chinese capabilities and deepen US influence in the region.