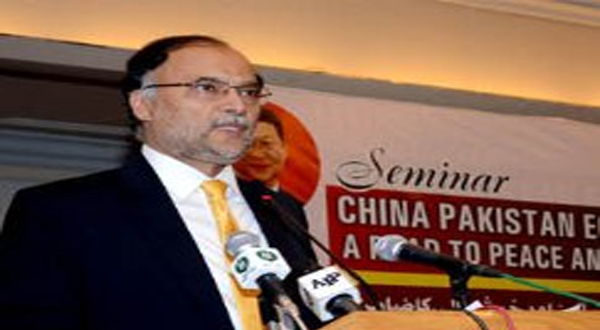 KARACHI: Minister for Planning and Development Ahsan Iqbal has said China-Pakistan Economic Corridor (CPEC) would be equally beneficial for all the provinces.

‘Social and economic activities have started under this project in Balochistan,’ he said addressing a seminar titled China Pakistan Economic Corridor: A Road to Peace and Prosperity of the Region in Karachi.

The minister said two international standard roads were being constructed from Gwadar to Quetta, and from Gwadar to Khuzdar to Ratodero. He said like Gwadar, Gilgit-Baltistan would also be gateway to CPEC.

Ahsan Iqbal said $46 billion CPEC would prove a game changer for entire region. It would interlink South Asia, Central Asia and Europe , and open billions of dollars market for Pakistan and other regional countries.

He rejected the impression and reports that the original plan/alignment of CPEC was altered. He said not a single inch change has been made in the CPEC.