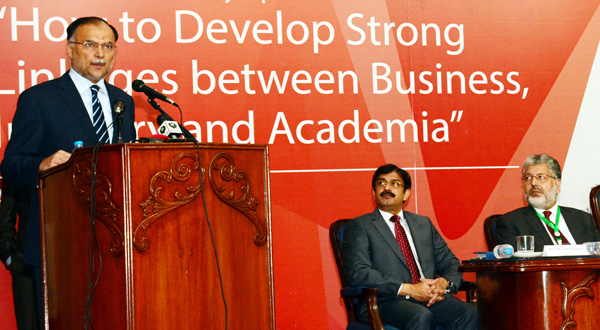 Federal Minister Planning, Development & Reform Ahsan Iqbal Thursday said that Pakistan is on the point of economic takeoff to become next success story and being dubbed as emerging economic power of Asia.

Addressing as chief guest at one day symposium “How to develop strong linkages between, Business and Industry & Academia” organized by Higher Education Commission (HEC) Ahsan Iqbal said that the way government, army, judiciary and other segments of society demonstrated unity to fight terrorism should be replicated for economic development.

He said that verdict of Supreme Court in favour of parliament is reflection that all institutions are on one page to eliminate terrorism once and for all from the country.

He said that two years vigorous efforts turned Pakistan into promising destination for business and investment in 2015 compared to 2013 when country was being projected as a failed state in Western media.

“The same western media today is portraying Pakistan as fast emerging economy of Asia by terming Pakistan the new success story on economic horizon”, he pointed.

He, however deplored the state of affairs in section of domestic media which is projecting the country as it is poised for crash and disaster. We need to create a positive outlook by infusing the conviction of positivity, which he said unfortunately missing in local media.

He urged that we all should commit to become ambassadors of positive thinking by defeating the forces of “gloom and doom”, which always see the country through lens of negative approach.

Speaking about theme of symposium, the minister emphasized the need for aligning knowledge platform with production platform without which the dream of robust growth can’t be realized. He said that without this alignment, the investment of billions of rupees in business and producing PHDs in science would go waste.

He said that government initiated one billion rupees Technology Innovation Fund to promote culture of innovations in scientific field. Technology is the name of new game in the world and countries with no innovations are bound to fail. He said that academia-industry link platform are also required to be competitive in the global market.

HEC Chairman Dr. Mukhtar Ahmed acknowledged the efforts of Prof. Ahsan Iqbal in patronizing HEC and said that today’s symposium is the brainchild of Ahsan Iqbal, who motivated HEC to hold this symposium in order to create academia industry link. The symposium was attended by vice chancellors, industry leaders and entrepreneurs.