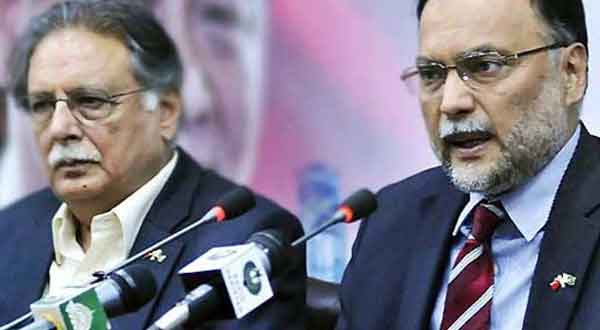 While addressing press conference in Islamabad, Federal Minister of Information and Broadcasting Pervaiz Rasheed said that PML-N leadership held important meeting with Prime Minister Nawaz Sharif to discuss matters relating to detailed version of NA-125 verdict where the PM heard point-of-views of his political accompanies and legal experts whether to go SC or not.

Federal Minister of Planning and Development Ahsan Iqbal said that the decision was made ‘to void creation of wrong traditions’ by being irresistible over the matter. He alleged that PTI chairman Imran Khan is making attempt to dent economic agenda of PML-N government by making conspiracies and creating confusion for foreign investors despite visible economic developments being observed by international rating agencies in Pakistan.

Iqbal said that Imran Khan has observed to face worst defeat if he waited by 2018 and he is trying to bar foreign investments in Pakistan.

He added that PML-N decided to go SC after holding consultation with legal experts over the matter.