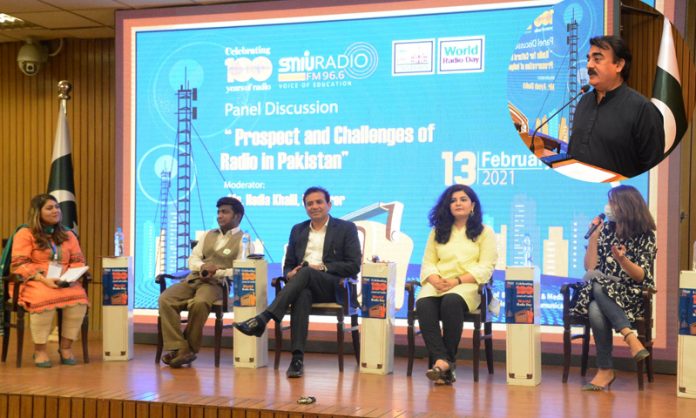 Karachi: In the seminar on “World Radio Day” at Sindh Madressat-Ul-Islam university,Speakers have a controversy over the issue of Urdu language in the radio broadcast,here on Saturday.

13 February is celebrated as “World Radio Day”,On the occasion of the day,  One day seminar on the theme of “The Importance and role of Radio station in Pakistan” was organized under the director of broadcasting and media training centre at Sindh Madressat-Ul-Islam university,which was aimed to making students realize the importance and usefulness of radio, who are stepping into the media industry.

The matter took a tremendous situation when the second panel discussion (prospects and challenges of radio in Pakistan) started after the lunch break. The reason given by many speaker  for radio degration during seminar is the lack of resources and budget

Liaquat university for health and science radio station manager Mushtaq Bhatti said while answering the questions that,Community FM or commercial it is unacceptable that karachi’s program should be broadcast in Noriabad,Thana Bhola Khan and interior Sindh, While earlier he had confess that the lack of resources and Budget was the biggest obstacle for the radio development in Pakistan.

Responding to this,Private FM’ Rj and Voice Dubbing Artists Farheen Malik said that,it a technical and lack of resources issue,No slot is left empty, Which is why Karachi and other big cities station program is broadcast in  rural areas,which can be solved by broadcasting local music or a local awareness campaign,these are the stations manager’s issues,you can talk to them about it, if the conversation continues like this any of the students would not like to come in the field of radio.

Panel hosts included the audience’s question in the end of program,then media training centre of Sindh Madresaat-Ul-Islam university said that,Earlier I work for seven years for a local FM and we used to earn money for the stations then the complaint of  lack of resources is wrong, Another questioned is come from the audience is that, why the Mathli’s program does not broadcast in Karachi while the Karachi’s Program is broadcast in Mathli, After which the atmosphere became more tense then the answer was also given from the audience that Urdu is our national narrative, which is why Urdu language programs are heard all over Pakistan. If anyone has run a successful private FM, his money has gone into the pocket of the owner, That is the open argument of capitalism. 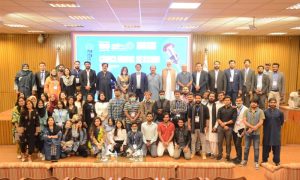 During these a member of governing body of Arts Council Karachi Ayub Sheikh said that it is nonsense that there should be programs in sindhi language throughout sindh, just as someone says that Urdu is our national language,On this RJ tehreem insisted him not to talk about linguistics.

But Ayub Sheikh continues his speech and said that  I’m not talking about urdu narrative I’m talking about famous Turkish drama serial “Ertugrul Ghazi” and it is anti-Pakistan, What scientific education have we given to our nation from this drama on which RJ Tahreem Muniba replied that the drama “Ertughal Ghazi” strengthens your faith, to which Ayub Sheikh said, “I don’t need faith at all.”

After that a jasarat’s reporter tries to cantact to the spokesperson of Sindh Madressat-Ul-Islam university through telephone, However no response was received.

Below is a link to the full panel discussion: