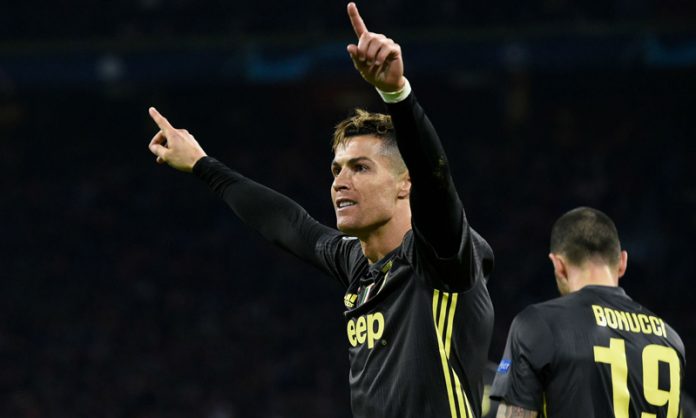 Cristiano Ronaldo was again hailed by Juventus coach Massimiliano Allegri after scoring with his side´s only shot on target to earn a 1-1 draw away to an excellent Ajax in the first leg of their Champions League quarter-final in Amsterdam on Wednesday.

On his return from a thigh injury, Ronaldo subdued the 50,000 home fans in the Johan Cruyff Arena when he headed Juventus in front on the stroke of half-time to take his record goal tally in the competition to 125.

However, Brazilian winger David Neres conjured a stunning equaliser almost immediately after half-time to give Ajax a draw that was the very least they deserved.

Despite that, it is Juventus — for whom substitute Douglas Costa struck a post late on — who hold the upper hand heading into next Tuesday´s return in Turin, with the winners of this tie facing Manchester City or Tottenham Hotspur in the last four.

“Ronaldo showed that he is on a different level. His timing and movement are different to everyone else´s, there´s nothing you can do about it,” said Allegri.

Ronaldo had not played for his club since scoring a hat-trick to dump out Atletico Madrid in the last 16, and his goal here saved the visitors in the face of another fine Ajax performance.

“Ajax have great quality. We suffered after their goal but we defended well and finished the game better,” added Allegri.

Ronaldo won the trophy in the last three seasons with Real Madrid, but a fearless Ajax ended the Spanish side´s European hegemony in the previous round after a thrilling 4-1 victory in Spain.

This result allows them to maintain hope ahead of the return, even if they might feel they should have won here.

“He´s a world class player but I think we did well tonight,” captain Matthijs de Ligt said of Ronaldo.

The Ajax coach, Erik ten Hag, added: “It is not the result you hope for, but it is a result. Last time we lost 2-1 to Madrid at home so we are still in it.”

Ten Hag´s brilliant young side is likely to be broken up at the end of this campaign, so this may be the Amsterdam club´s best chance in a long time to win a fifth European Cup.