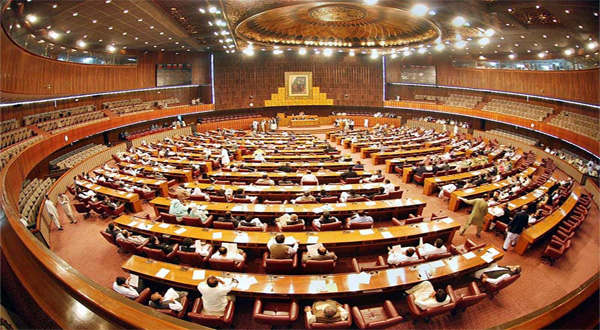 ISLAMABAD: The federal government and the Pakistan Tehreek-e-Insaf (PTI) leadership planned a riot in Parliament Lodges and Parliament on the occasion of the no-confidence motion on Sunday.

According to senior journalist Hamid Mir, it has been decided that the opposition members will first be stopped in the Parliament Lodges so that they cannot reach the National Assembly.

According to him, the plan is to give PTI protesters access beyond D-Chowk. It is learned that the Speaker has opposed the proposal to delay the voting process tomorrow and said that tomorrow is the last day and voting cannot be postponed.

The security establishment has told the government that there is no evidence that the no-confidence motion is an international conspiracy. If the government has evidence, the provide it.

Earlier, Jahangir Tareen had decided to support Hamza Shehbaz for the post of Punjab Chief Minister.

PML-N leader Ishaq Dar has claimed that the matter between Tareen Group and PML-N have been settled and Tareen Group will support the joint Opposition candidate for Punjab Chief Minister Hamza Shehbaz.

In a message released on social media, senior PML-N leader Ishaq Dar said that the last round of talks with Jahangir Tareen was fruitful. He also thanked Jahangir Tareen and his group for supporting the joint Opposition candidate.

It may be recalled that Jahangir Tareen had a long meeting with PML-N leader Ishaq Dar in London in which they discussed the country’s politics and considered various options for the future.

It should be noted that the joint Opposition has nominated Hamza Shehbaz for the post of Chief Minister of Punjab while PTI has nominated Pervaiz Elahi, the leader of the coalition party Q League.

After the acceptance of the resignation of the Punjab chief minister, the Punjab Cabinet has also been dissolved.