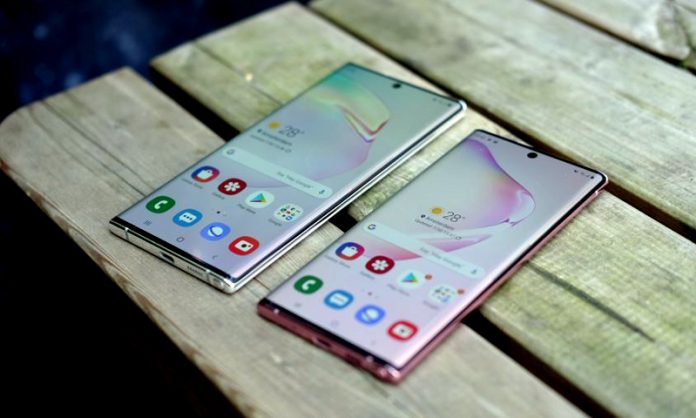 The Plus model is the only one to have a microSD slot, which supports cards up to 1TB (it’s a hybrid slot on the dual SIM version, though).

There will also be a Note 10 5G available for preorder on the 23rd that will be exclusive to Verizon for “a limited time.

The trademark S Pen has some new cool features that make it even more useful. It has gained an accelerometer and a gyroscope so it can be used as a motion controller. The default gestures help you navigate the UI at a distance, but Samsung is opening up the Air Actions SDK, so app and game developers can use it in new, creative ways.

Both devices get the same-sized S Pen, but they offer different canvas to work on. The large model boasts a 6.8” Dynamic AMOLED panel with 1440p+ resolution (498ppi).

As far as features are concerned, the Note 10 comes with a 6.3” Dynamic AMOLED display with 1080p+ resolution (401ppi). Both screens support HDR10+ and Dynamic Tone Mapping for great image quality regardless of content.

Both Notes share a triple camera setup. The main camera features a 12MP sensor, optical image stabilization (OIS) and a dual aperture (f/1.5 and f/2.4). There’s also a telephoto camera with a 12MP sensor and OIS, plus a 123° ultra wide-angle 16MP camera.

In addition the Note10 Plus  also features a 3D ToF sensor, which is used by the 3D Scanner app to create 3D models of real-life objects (it can scan objects as large as 80 x 80 x 80cm).

Unlike the S10 phones, the screens of the Galaxy Note10 duo have centered punch holes for the 10MP selfie camera (with an 80° lens and autofocus).

The phones can record 4K video and offer features like Life focus video (bokeh) and an improved version of the Super steady feature (which gained a Hyperlapse mode).

The Plus model also has a larger battery – 4,300mAh – with 45W Super Fast Charging. Samsung says that you only need 30 minutes of charge to last you through the day. The catch is that you’d need to buy the 45W charger separately as you only get a 25W one in the box.

The smaller phone gets a 3,500mAh battery with 25W charging. Both support fast wireless charging and reverse wireless charging, so you can top up accessories like a Galaxy Watch, Galaxy Buds or even other phones.