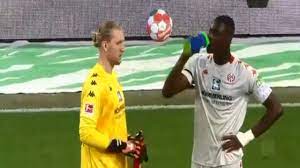 For the first time in the German Raman Football League (Bundesliga), a match was stopped to break the fast of a Muslim footballer.

According to foreign media reports, the pleasant incident took place on Wednesday, April 6, where a match was being played between Augsburg and Mainz in the famous German Football League Bundesliga. The match was abruptly stopped to break the fast.

For the first time in history, a Bundesliga game was stopped for so that a Muslim player could break his fast during the match.

In the game between Augsburg and Mainz 05, the referee stopped the game at sunset so Moussa Niakhaté could take some fluids. pic.twitter.com/I8oqcP2Xpg

Meanwhile, the goalkeeper of the men’s team handed over bottles of water or juice to Moussa Niakhate, with which the Muslim footballer broke his fast and then the match resumed.

According to reports, Moussa Niakhate became the first player in the history of Bundesliga to break his fast in a match. Moussa Niakhate also thanked the referee for this excellent step.

On the other hand, the Director of Communication of the German Referee Committee has allowed the referees to stop the match to allow the Muslim players to break their fast.

It should be noted that in this match Augsburg won 1-2 against Mainz.