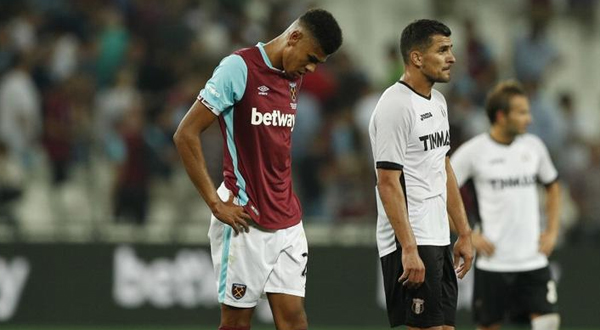 PARIS: English Premier League club West Ham suffered a shock defeat by Romanian side Astra Giurgiu on Thursday that saw them knocked out of the Europa League in a mirror image of last season’s campaign.

Slaven Bilic’s side had left the tie in the balance after a disappointing 1-1 away draw a week ago and that result came back to haunt them as Astra took the lead on the stroke of half-time through Filipe Teixeira.

West Ham were guilty of slack defending as Daniel Niculae found Teixeira free in the box with the striker rolling the ball past Darren Randolph.

That was enough to hand the Romanians a 2-1 victory on aggregate, mirroring Astra’s 4-3 win over the Hammers at the same stage of Europe’s second-tier club competition last season, a hammerblow for West Ham fans hoping to see more European football at the club’s new Olympic Stadium base.

In other results, French side Saint-Etienne endured a torrid final 45 minutes at stade Geoffroy-Guichard after goalkeeper Stephane Ruffier was sent off on the stroke of half time for punching Beitar Jerusalem striker Itay Shechter.