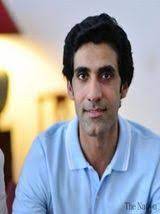 Speaking on a Geo News show, Aun Chaudhry said that the whole gang including Khawar Manika and his son were involved in the case.

Aun Chaudhry said that he had told Imran Khan that Farah Gogi and Ahsan Gujjar were running Punjab.

He said that Manika family was ruling in Punjab as if their father had been appointed as the prime minister.

Earlier, Aun Chaudhry of Tareen Group had been appointed as advisor to Prime Minister Shehbaz Sharif.

Aun Chaudhry has also been notified to be made advisor to the prime minister.