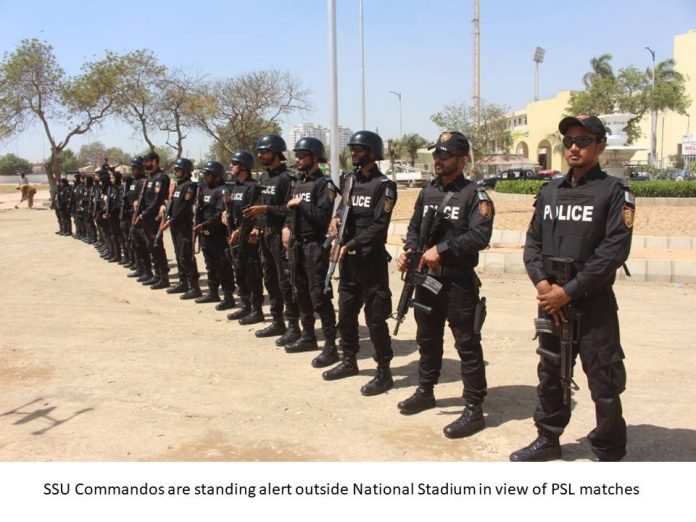 KARACHI (PR): The Traffic Police on Wednesday prepared a comprehensive foolproof security plan in collaboration with the Special Security Unit for the Pakistan Super League’s fifth edition matches to be played in Karachi from Feb 20.

The security plan has been made on the directives of IGP Sindh Dr. Syed Kaleem Imam and DIG Police Security and Emergency Service Division Maqsood Ahmed.

The plan has been developed in consultation with all the stake holders including Pakistan Rangers Sindh, all Zonal DIGs and PCB.

According to the plan, about 696 SSU Commandos including 33 lady commandos will perform security duties alongside personnel from other law enforcement agencies at the National Stadium Karachi, Karachi Airport, routes, parking lots, hotels and other different areas, while sharp shooters will also be deployed at sensitive points.

Whereas, 30 camera-fitted vehicles have been deployed at different points for security along with 40 vehicles of SSU commandos.

Besides, personnel of SSU have also been assigned duties to guide spectators at the gates of National Stadium and parking lots. They will perform their duties in track suits.