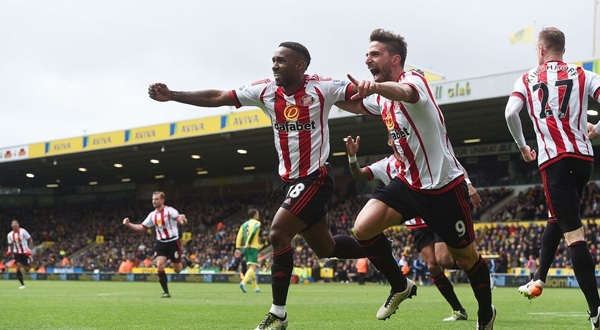 NORWICH, United Kingdom: Sunderland grabbed a priceless lifeline in the fight for Premier League survival as goals from Fabio Borini and Jermain Defoe inspired a 3-0 win over relegation rivals Norwich on Saturday.

Sam Allardyce’s side would have been on the brink of crashing into the Championship if they had lost at Carrow Road, but Borini’s first half penalty and strikes from Defoe and Duncan Watmore after the interval significantly improved their hopes of staying up.

Sunderland remain in the relegation zone after their first win in seven matches, but they are now only one point behind fourth bottom Norwich with a game in hand.

Allardyce has never been relegated from the top-flight and he could be on course to mastermind another great escape to emulate Sunderland’s last-ditch revival under Dick Advocaat 12 months ago.

For Norwich, it was further setback to their survival bid after last weekend’s loss at Crystal Palace and they face a nervous last four matches as the relegation struggle goes to the wire.

Norwich’s failure to avoid defeat also meant Aston Villa were given a stay of execution, although the bottom club would be relegated if they fail to win at Manchester United later on Saturday.

After unexpectedly meeting in the 1985 League Cup final, these two clubs had established such a rapport that matches between them are now played for the ‘Friendship Trophy’.