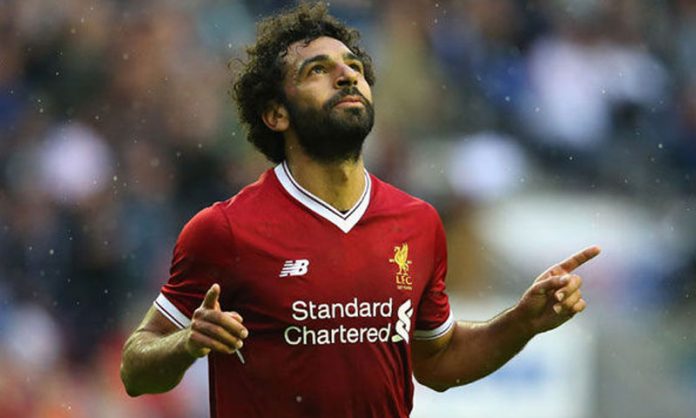 Mohamed Salah could be the man to finally break the Ronaldo-Messi duopoly at the top of world football after the Liverpool forward burnished his soaring reputation with a mesmerising Champions League performance against Roma.

Real Madrid’s Cristiano Ronaldo and Barcelona’s Lionel Messi have locked down the Ballon d’Or award for a decade, winning five gongs apiece — for the past seven years they have occupied the top two slots.

But Salah is now second favourite with many bookmakers behind Ronaldo for this year’s award after scoring his 42nd and 43rd goals of the season in a thrilling 5-2 victory for Liverpool in the Champions League semi-final first leg.

After his first strike against his former club on Tuesday, the man dubbed by fans as the “Egyptian King” stood motionless, hands raised in apology, as bedlam broke out on a night for the ages at Anfield.

Salah’s curling effort arrowed into the top corner with such accuracy his manager Jurgen Klopp labelled it “a genius strike”.

Soon after came the forward’s signature finish, a cute dink over advancing Roma goalkeeper Alisson for his 43rd goal in 47 games for Liverpool.

When Salah, 25, made the move from the Italian capital back to the Premier League just 10 months ago for 42 million euros (£37 million, $51 million), there were plenty who felt Roma had got the better deal. Salah after all was a talented player, but who often lacked an end product.

It also came just a few weeks before Neymar’s move from Barcelona to Paris Saint-Germain for a world record 222 million euros revolutionised the transfer market.

The Brazilian’s desire to leave the Catalan giants was tied to his ambition to beat Messi and Ronaldo to the Ballon d’Or by stepping out of Messi’s shadow.

Now, though, it is Salah who has emerged as the pretender to end the Messi-Ronaldo domination by not only scoring the quantity of goals that have become the pair’s trademark but doing it when it really matters, in the latter stages of the Champions League.

“If you think he is the best in the world, write it or say it,” urged Klopp, who has been credited with bringing out Salah’s previously untapped potential.

“To be the best in the world you need to do that over a longer period I think, and there are a few others that are not so bad.”

Heavily left-footed, small, speedy and with a low centre of gravity, Salah’s characteristics are far more like those of Messi than the muscular goal-machine Ronaldo.

“In a certain light, at certain points, it is possible to glimpse in Salah a little of Messi’s afterglow,” wrote Rory Smith in the New York Times.

And he demonstrated another Messi-like quality in showing no mercy to Roma.

Chasing his first hat-trick in the Champions League, Salah would have been forgiven for going for goal as he bore down on Alisson once more after half-time.

But he showed why he is considered one of the game’s more unselfish superstars by instead creating another two goals for strike partners Sadio Mane and Roberto Firmino.

When Salah left the field to a standing ovation 15 minutes from time, Liverpool led 5-0.

“Unstoppable (when Salah’s on the pitch),” said the back page of The Times.

Two late Roma away goals have at least given the Italians hope of recreating the incredible comeback they staged from a 4-1 first-leg deficit against Barca in the quarter-finals.

For once it is Salah’s turn to lead the way where Messi faltered on his return to the Eternal City next week.

Messi is almost certain to win a La Liga and Copa del Rey double and Ronaldo could lead Real Madrid to a third consecutive Champions League after another bucketload of goals this season.

But Salah is the coming man and after bagging the African and English players’ player of the year crowns, it is hard to back against him also conquering the world.