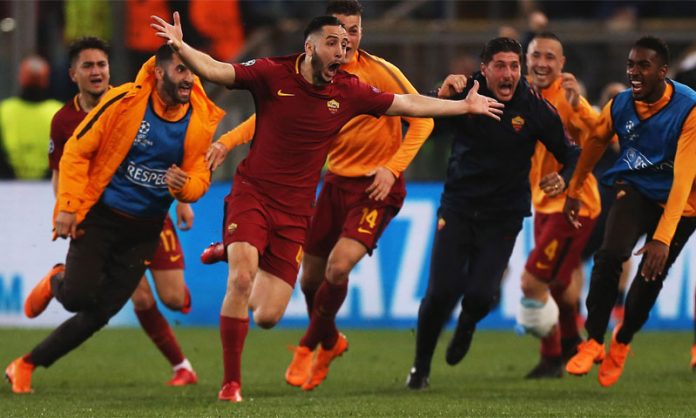 “The fall of Rome” was how one Catalan daily described Barcelona’s shock 3-0 defeat to Serie A side Roma on Tuesday which ended the Spanish league giants’ bid for a place in the semi-finals.

As Roma look forward to their first semi-final since 1984, Barcelona are licking their wounds having failed to reach the Champions League last four for the second consecutive season.

Roma’s achievement is just the latest in a long list of comebacks in the competition:

Retired Roma great Francesco Totti conceded “it could have gone better” when he personally pulled Barcelona out of the hat to meet Roma at the draw for the last 16. “We’ll be up against one of the biggest sides in Europe,” said Totti, now a sporting director at the club he served for over two decades before retiring at the end of last season.

Totti’s fears seemed justified when Barcelona beat the Italians 4-1 at the Camp Nou in the first leg. But Roma’s away goal left a hint of hope, and Roma — led by Bosnian centre-forward Edin Dzeko — stunned a static Barca side with three goals on Tuesday to send the Stadio Olimpico, and indeed the Italian capital, into a frenzy.

With their heads held high after an impressive 4-0 win over Barca in Paris, Unai Emery’s stylish Parisians lost their swagger during a 6-1 mauling by Barca at the Camp Nou. They were guilty of complacency and lacking focus, notably late on when they conceded three times in the final seven minutes as Neymar took control for Barcelona.

Barcelona’s penchant for changing their own Champions League fortunes at the last minute is nothing new. After a humbling 3-1 defeat to Chelsea at Stamford Bridge, a Barca team led by Brazilian great Rivaldo and Portuguese star Luis Figo extinguished the Blues’ hopes at the Camp Nou in the return leg.

Boosted by Tor Andre Flo’s precious away goal for Chelsea on the hour, the visiting Chelsea fans were given plenty of reason to dream. But an 83rd minute goal by Dani Garcia pushed the match into extra-time, and Chelsea — who saw Celestine Babayaro sent off in the 98th minute — collapsed when Rivaldo, from the spot, then Patrick Kluivert, scored Barca’s fourth and fifth goals.

Looking at a team sheet featuring names like Zinedine Zidane, Ronaldo, Raul and Roberto Carlos, Monaco fans would have been forgiven for writing off the French side’s Champions League hopes in 2004.

Monaco lost the first leg of the quarter-final 4-2 at the Santiago Bernabeu. But the Principality side, led by fledgling coach Didier Deschamps, produced one of the shocks of the competition with a 3-1 defeat of the Galacticos that, thanks to their two away goals, fired them into the semi-finals, and then a final which they lost to Jose Mourinho’s FC Porto.

Tradition dictates that the top players always shine in the most critical moments. And Cristiano Ronaldo is no exception.

Amid an otherwise underwhelming season under coach Rafael Benitez, the Spanish giants looked on their way to an early exit after a 2-0 loss to Wolfsburg in the quarter-final first leg.

Ronaldo was just one of several of Benitez’s stars to face heavy criticism. A week later, ‘CR7’ silenced his detractors with a well-taken hat-trick in a 3-0 away win that sent Real on their way to the first of two consecutive triumphs.

What is still billed as the craziest comeback in the history of the Champions League occurred over the space of 90 minutes, plus extra time and penalties, in 2005.

Liverpool were facing a humiliating loss to AC Milan after the Italians struck three times in the opening half thanks to a first-minute effort from Paolo Maldini and a Hernan Crespo double.

It is said Liverpool’s players could hear AC Milan celebrating what they thought was an impending victory at half-time. In a legendary second half, a much-changed Reds’ side hit back.

Captain Steven Gerrard sparked the revolt when he scored on 54 minutes. When Vladimir Smicer then Xabi Alonso brought the scores level, AC Milan were stunned. After a scoreless period of extra-time, Liverpool prevailed 3-2 on penalties.