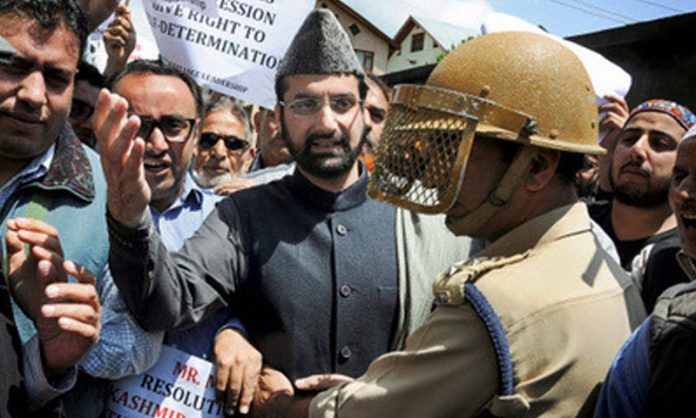 Srinagar : In occupied Kashmir, the puppet authorities have imposed curfew-like restrictions in Srinagar, today, to stop people from conducting a march towards historic Lal Chowk to register protest against the Indian Prime Minister, Narendra Modi’s visit to the territory.

Call for the march has been given by the Joint Resistance Leadership comprising Syed Ali Gilani, Mirwaiz Umar Farooq and Muhammad Yasin Malik. This is the same Lal Chowk where the 1st Indian Prime Minister, Jawaharlal Nehru, had promised the Kashmiris of giving them their inalienable right to self-determination several decades ago. The Hurriyat leaders and organizations have also appealed to the people to hoist black flags on the rooftops of their houses and other vantage places.

The puppet authorities have sealed all roads leading to the Lal Chowk and deployed Indian troops and police personnel in strength in Srinagar and all other major towns of the occupied territory to prevent the march. The authorities have put Hurriyat leaders including Syed Ali Gilani, Mirwaiz Umar Farooq, Muhammad Yasin Malik, Muhammad Ashraf Sehrai, Ghulam Ahmed Gulzar, Muhammad Yousuf Naqash, Bilal Siddiqi, Mukhtar Ahmed Waza, Zafar Akbar Butt, Javaid Ahmed Mir and Muhammad Ashraf Laya under house arrest or in custody to prevent them from leading the march. The puppet administration has also snapped mobile and internet services across the territory and ordered closure of all educational institutions to stop students from holding anti-India demonstrations and conducting the march.

The resistance leadership in a statement said, the Indian Prime Minister, Narendra Modi’s proposed visit to the occupied territory is aimed at giving a false impression to the world that the Kashmiri people are happy under the Indian democracy whereas India has made the territory a hell.

Mirwaiz Umar Farooq in a tweet message hit out at the authorities for imposing curbs on the movement of people ahead of Narendra Modi’s visit. “As the authoritarian rulers once again belie any claim to democracy by imposing #HouseArrests #Curfew #Restrictions #Barricades #Blockades closure of educational institutions on the visit of Indian PM to Valley, I will peacefully march towards #LalChowk at 11 am,” he tweeted.

Meanwhile, on the call of the Joint Resistance Leadership, complete shutdown is being observed, today, to register protest against Narendra Modi’s visit to the territory. All shops and business establishments are closed while traffic is off the road.