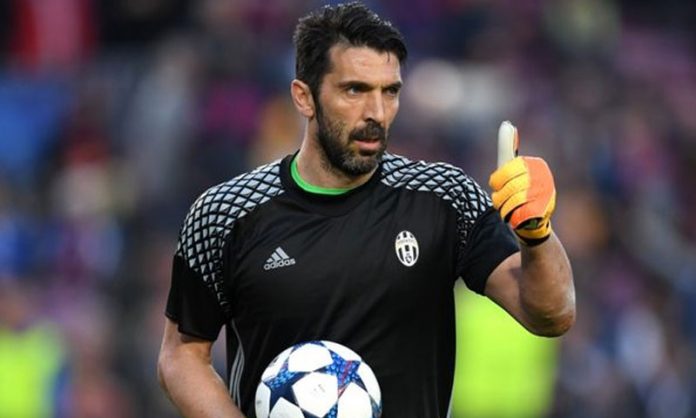 Gianluigi Buffon’s Champions League career came to a bitter end on a crazy night with the Juventus legend sent off in Madrid and then accusing the referee of having “a rubbish bin instead of a heart”.

The veteran goalkeeper’s frustration spilled over at the Santiago Bernabeu after Juventus beat Real Madrid 3-1 on the night, but were eliminated 4-3 on aggregate in the quarter-final after English referee Michael Oliver awarded the Spaniards a contested 97th-minute penalty.

“In place of a heart he has a rubbish bin,” raged 40-year-old Buffon after Oliver pointed to the spot for Mehdi Benatia’s challenge on Lucas Vazquez in the dying minutes.

Buffon was given his first ever red card in 117 Champions League games and after Wojciech Szczesny had taken his place in the Juventus goal, Cristiano Ronaldo coolly slotted home the spot kick to put defending champions Real Madrid through to the semi-finals.

“You have to be a murderer to make the last two decisions the referee made,” Buffon, the Juve captain, said later.

“You cannot ruin the dreams of a team. I could’ve told the referee anything at that moment, but he had to understand the degree of the disaster he was creating,” he continued.

“If you can’t handle the pressure and have the courage to make a decision, then you should just sit in the stands and eat your crisps.”

It was another blow for the charismatic 2006 World Cup winner who was reduced to tears after Italy dramatically failed to qualify for the global showpiece in November’s playoffs.

Juventus have finished runners-up twice in the Champions League in the past three years and Wednesday’s defeat was probably Buffon’s last chance to continue his bid for the only major title missing from his collection.

“I’m not here to judge what the referee saw, because it was a borderline incident,” he said, continuing his diatribe.

“All I’ll say is that you can’t be that cynical in the 93rd minute, to shatter the dreams of a team that had given everything it had to give.

“I’ve always found it an honour to go up against this team and this club in front of this crowd, but tonight we deserved extra time at the very least.”

Juventus president Andrea Agnelli said he could understand Buffon’s fury and called for the introduction of the use of VAR in the Champions League — it is already used in the Serie A in Italy.

“The referee did not understand anything, and tonight the least happy person of all should be him,” said Agnelli.

Benatia, whose challenge led to the penalty, said: “It’s unbelievable that our captain isn’t allowed to speak to the referee — the red card was very harsh.”