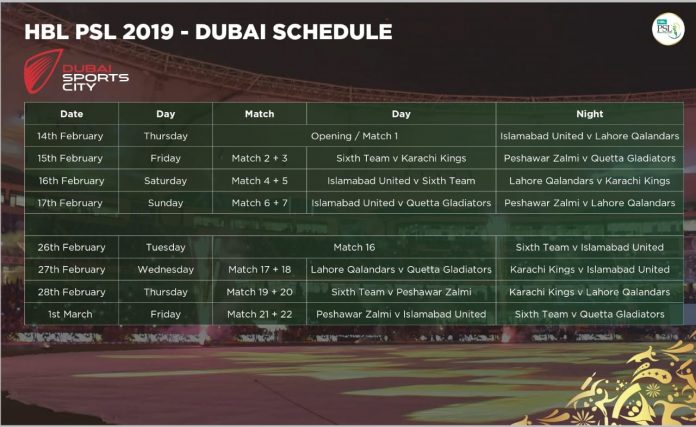 LAHORE: The Pakistan Cricket Board revealed the full schedule of the fourth edition of Pakistan Super League (PSL) on Friday.

PSL fourth edition will commence from February 14, 2019 and conclude on March 17, 2019. The T20 tournament will span across Dubai, Sharjah and Abu Dhabi in the UAE leg, before moving to Lahore and Karachi for the concluding eight matches.

Islamabad United and Lahore Qalandars will face off in the opening fixture on February 14 in Dubai.

The final will be held in Karachi on March 17.

South Africa’s AB de Villiers and Brendan Taylor of Zimbabwe, who will wear Lahore Qalandars’ kit, and Steve Smith of Australia, who will represent the Sixth team, are three of the 19 players expected to make their PSL debuts in 2019.