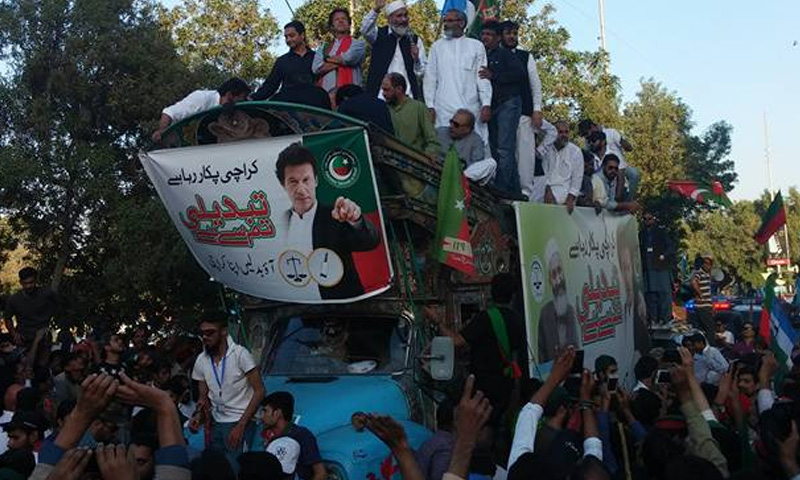 ISLAMABAD: Private media has been barred from covering the Pakistan Tehreek-e-Insaf’s (PTI) rally being held at the Parade Ground.

Pakistan Tehreek-e-Insaf (PTI) has removed the DSNGs of private channels from the venue.

The management of PTI rally said that cameramen of any private channel are not allowed to cover the meeting.

Farrukh Habib, Minister of State for Information and Broadcasting, said that the coverage of the meeting could only be done by the state TV channel.

It may be recalled that Imran Khan had also released a special audio message last night for today’s meeting of Pakistan Tehreek-e-Insaf (PTI) and appealed to the people to reach Islamabad as soon as possible.

Yesterday, Prime Minister Imran Khan had said that the government is a trivial matter, even if he dies, he will not leave the ‘three rats’.

Nawaz Sharif will never allow the independent judiciary to function in Pakistan, the Election Commission is already with him and now he is including the judges of the Supreme Court with him, the prime minister said.

Addressing a rally in Kamalia on Saturday, the prime minister addressed Asif Ali Zardari as the ‘biggest disease’, Shehbaz Sharif as ‘Cherry Blossom Sharif’ and Fazlur Rehman as ‘diesel’ and said that the opposition plans to overthrow his government and abolish NAB after coming into power. If he stays as prime minister, they all will be in jail.

I am thankful to Asif Ali Zardari, Fazlur Rehman and Shehbaz Sharif as our dissidents MNAs had returned after seeing their faces, he added.

The prime minister said that the person sitting in London will come back and spend money on TV channels first. The Election Commission is already with him, after that he will attack the judiciary of Pakistan. From now on he is dividing the judiciary. He will never allow an independent judiciary to run because he has to close his cases and then the next attack will be on the Pakistan Army.

I know Nawaz Sharif since he tried to play poor cricket. He also used to play with his umpire on ground, the prime minister said.