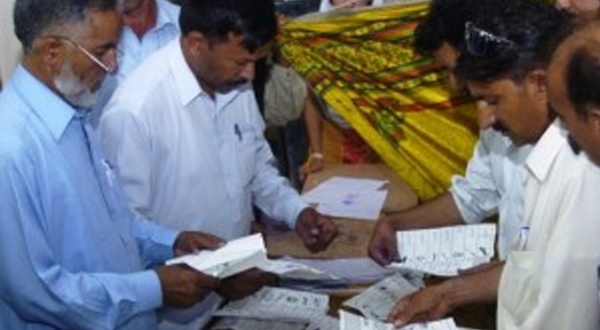 KARACHI: The PPP took a clean lead in the first phase of Sindh’s local bodies elections in 14 districts, according to unofficial results.

Sindh voted in the polls a day earlier amidst sporadic incidents of violence, clashes and at least two deaths.

The polling process started at 8am and continued until 5pm without any pause. The Election Commission of Pakistan (ECP) had announced extending voting time in areas where the polling was stopped.

Elections in the rest of the districts of Sindh will be held on July 24.

Two people, including the brother of a PTI candidate were killed and at least 20 people were injured in the clashes that broke outside various polling stations.

Tando Adam PTI Divisional President Mushtaq Junejo claimed, “I can confirm the death of Qaiser, brother of our party’s candidate Asghar Gandapur in Tando Adam. Qaiser was subjected to violence which caused his death.”

Qaiser’s brother Zafar was contesting on ward-13 of the municipal committee, Tando Adam, who was also injured in the clash. The supporters blocked the Tando Adam road as the killing sparked a protest in the district.

Director General Health Dr Juman Bahoto confirmed that the body was received in Tando Adam Taluka Hospital. He said, “The cause of death can be ascertained only after a post-mortem is conducted.”

Reports said that a clash took place between voters of PPP and PTI at polling station Allah Jurio Jaghirani of Union Council Panhwari at Rohri in district Sukkur. In the clash, Abdul Qadeer Jaghirani was killed while Abdul Samad and Abdul Majid were injured.

Earlier in the day, the local body elections were postponed in a few wards due to misprinting (typographical errors) of the names of candidates in the ballot papers, confirmed a spokesperson of the ECP.

He maintained that the ECP will issue a new schedule for elections on the seats and added that the commission has launched an inquiry in this regard.

Meanwhile, several candidates in Nawabshah staged protests over misprinting of election symbols on the ballot papers.

A TLP candidate was of the view that he was allotted the symbol of a “crane” but it was printed as a “queen” in the ballot papers. However, the presiding officer stopped the voting process on the seat.

Some incidents of violence, clashes, and attacks on polling officials were also reported in different areas of the province.

Regional Election Commissioner Naveed Aziz informed in writing to the concerned SSP about the incident.