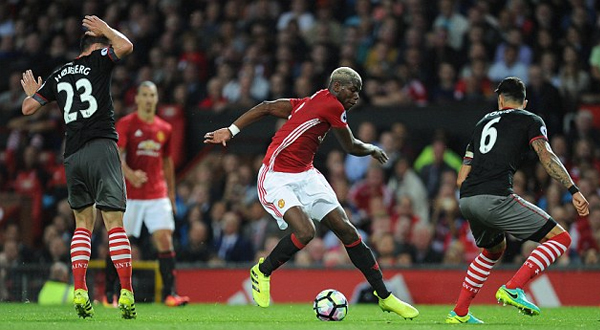 France World Cup star Paul Pogba is determined to end his fractious relationship with Manchester United manager Jose Mourinho and move to Barcelona, according to British media reports on Wednesday.

The 25-year-old — who scored in the 4-2 World Cup final win over Croatia — has agreed to terms with Barcelona for a deal worth £89.5 million ($115 million, 100 million euros) over five years, according to the Daily Mail.

The reported agreement would see him pick up £346,000 a week, almost double what he earns at United.

The Sun claims the former Juventus star — who joined United for a then world-record fee of £89 million in 2016 — has demanded the Premier League side increase his wages from £180,000 to £380,000 a week so he is paid almost on a par with Chilean star Alexis Sanchez, otherwise he will leave.

United, though, would be most reluctant to sell him, with the Daily Mail reporting they have already rejected a bid by Barcelona of £44.5 million plus Colombian central defender Yerry Mina and Portuguese midfielder Andre Gomes.

Mourinho has expressed his frustration over the club’s transfer policy, and Pogba’s departure would leave little time for executive chairman Ed Woodward to find a suitable replacement with the Premier League transfer window due to close on Thursday.

The club has had to deny the claim that Pogba sent a text message to Woodward demanding he be allowed to leave.

The Frenchman is keen to move to Barcelona — the Spanish transfer window does not shut till the end of the month — to play with Argentina superstar Lionel Messi, while his close friend and former Juventus team-mate Arturo Vidal also recently moved to the Catalan giants.