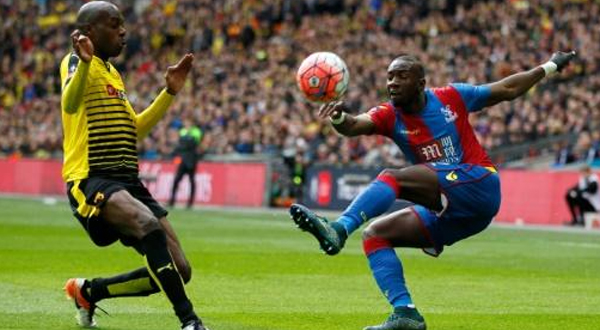 LONDON: Alan Pardew claimed Crystal Palace were inspired by the spirit of 1990 as they beat Watford 2-1 to set up an FA Cup final revenge mission against Manchester United.

Pardew scored the winning goal when Palace shocked Liverpool in the Cup semi-finals 26 years ago and the Eagles manager leaned heavily on that famous giant-killing to mastermind the south Londoners’ success at Wembley on Sunday.

After inspiring his players earlier in the week with a motivational talk about the 1990 run, which ended in a final replay defeat against United, Pardew also reached back into the archives for a set-piece routine used by then boss Steve Coppell.

A back-flicked header by Andy Thorn from a corner led to Pardew’s headed winner against Liverpool.

And Palace deployed the same tactic to create the opening goal in the sixth minute against Watford when Damien Delaney headed on Yohan Cabaye’s corner for Yannick Bolasie to nod home.

“It got a couple of mentions in the week. Some of my staff talk about it all the time,” Pardew said.

“We did pay homage to that side with the flicked on corner. Sometimes history does repeat itself.

“It was a well constructed goal and Steve Coppell can take a bit of credit for that.” The disappointment of Troy Deeney’s 55th minute equaliser couldn’t shake Palace’s belief they would return to the final for the first time since the golden days of Ian Wright and Mark Bright and they won it in the 61st minute through Connor Wickham’s towering header.

Asked to compare Palace’s current Cup finalists with their 1990s cousins, Pardew admitted there were similarities between the two unheralded squads.

“We have a similar side to 1990 in terms of the characteristics; diligent, hard working and a bit of pace on the attack,” he said.

“I’m pleased for the players. They have an honesty about them.

“We had a gameplan and they delivered it to the letter. We were magnificent and the spirit of the group saw us through.”

Now Pardew will focus on building a game-plan to beat under-fire Louis van Gaal’s United and avenge Palace’s 1990 loss to the Old Trafford outfit, which went along way to saving then manager Alex Ferguson’s job.

“I hope the destiny isn’t the same result because it’s an almost identical scenario for their manager,” Pardew said.

“I’m pleased for Louis because you guys in the media have given him a tough time this year.

“United have the makings of a great team. They are the biggest club in the world. “United are definitely going to be favourites but we have players who can hurt them.”

Meanwhile, Watford manager Quique Sanchez Flores insisted he didn’t deserve to have his position scrutinised following a week of speculation that he might be sacked.

Frustrated by Watford’s slump in the second half of the season, owners the Pozzo family are said to be considering dismissing Flores after only one season in charge and their lethargic defeat at Wembley hardly helped his case.

But the defiant Spaniard pointed out he had comfortably leading Watford to safety in their first season back in the top-flight.

“We don’t have reasons to talk about me. It is not a bad season, this season is amazing, but if the club want to talk to me in May then we will see,” he said.

“Everyone is disappointed we lost, but the main target was to be in the Premier League because that is the most important thing for the future of Watford.

“That target is done so I don’t understand why sometimes we need to be negative. I was a little bit sad in the week.

“I have a good idea what is a successful season for Watford, but I don’t want to justify it.”The owner has been here several years and we are working well.”