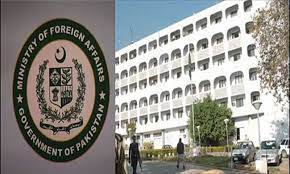 ISLAMABAD: Pakistan on Wednesday rejected India’s “mischievous” attempt to link the accused of the murder case in Udaipur with a Pakistani organisation.

“We have seen reports in a segment of the Indian media referring to investigations into the murder case in Udaipur, mischievously seeking to link the accused individuals — Indian nationals —  to an organisation in Pakistan,” said the Foreign Office spokesperson in a statement.

The spokesperson, while “categorically” rejecting the insinuations, said that the linking was a “typical” BJP-RSS “Hindutva” driven Indian regime’s attempts to malign Pakistan “including externalising their internal issues through pointing of fingers towards Pakistan”.

“Such malicious attempts will not succeed in misleading the people, either in India or abroad,” said the spokesperson.

A day earlier, the Indian police arrested two men after they beheaded a Hindu tailor on camera in the city of Udaipur over his support online for a former ruling party official whose remarks about the Prophet Mohammed (PBUH) sparked global protests.

“Both the accused in the killing have been arrested and we will ensure strict punishment and speedy justice,” Ashok Gehlot, chief minister in the state of Rajasthan, where Udaipur is located, said on Twitter.

However, today Rajasthan’s Home Minister Rajendra Singh Yadav claimed that one of the accused in the case had visited Karachi in 2014.

The Indian Express quoted Yadav as saying that Ghouse Mohammad, one of the accused, was in Karachi for 45 days in 2014.

“Then in 2018-19, he also had movements in Arab countries and visited Nepal a few times. For the past 2-3 years, he had been making calls to 8-10 phone numbers from Pakistan,” Yadav was quoted by the Indian publication.

According to Indian Express, Director General of Police ML Lather said that the accused had gone to visit the office of “Dawat-e-Islami”.