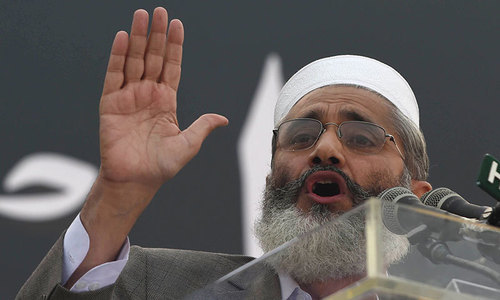 LAHORE: Jamaat-e-Islami Ameer Siraj-ul-Haq has said that family monopolies and one-man dictatorship have been established in the ruling parties, adding that landlords and corrupt capitalists have taken the country hostage.

Siraj-ul-Haq said that the decision of the Supreme Court regarding the interpretation of Article 63-A of the Constitution was a big step towards strengthening democracy. To get the country out of the current crisis, the rule of law and the constitution must be established. The nation’s confidence in democracy will be restored only with the abolition of lottery culture.

He said that Pakistan has been sobbing for 75 years. Kashmir was sold out.  The past and present rulers completely retreated over Kashmir to India. Remember that any ruler who betrayed the blood of Kashmiris will be a warning sign, he said.

Siraj-ul-Haq said that due to the negligence and incompetence of the Pakistani rulers, the goal of independence of Kashmir was lost. But it is certain that occupied Kashmir will soon be independent. The entire Pakistani nation and Jamaat-e-Islami stand by Kashmiris till the dawn of independence. Kashmiris have been sacrificing for Islam and Pakistan for seven decades.

Siraj-ul-Haq said that the BJP fascist government was inflicting oppression on Kashmiris on a daily basis. Since January 1989, Indian forces have killed about 100,000 Kashmiris in occupied Kashmir, of whom 7,233 were martyred in custody. Occupying Indian forces arrested 1.5 million Kashmiris, demolished more than 110,000 buildings and orphaned more than 100,000 children.