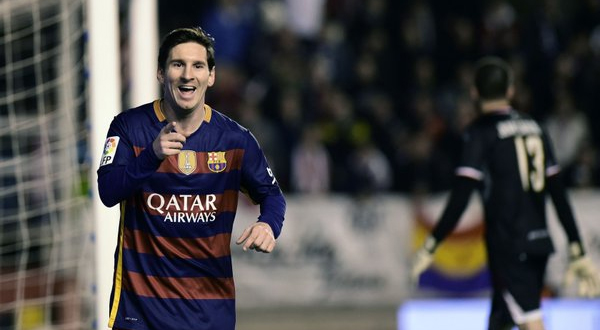 MADRID: Lionel Messi scored a hat-trick as Barcelona took another step towards the La Liga title and set a new Spanish football record of 35 games unbeaten in the process with a 5-1 win at nine-man Rayo Vallecano on Thursday.

Two goals in as many minutes midway through the first-half killed the game as a contest as Ivan Rakitic and Messi netted before Diego Llorente saw a straight red card for a high challenge on Rakitic.

Messi completed his hat-trick either side of Manucho’s consolation for Rayo. Luis Suarez also missed a penalty after Manuel Iturra was also sent-off for the hosts before Arda Turan rounded off the scoring with his first Barca goal.

Despite Rayo’s precarious position just above the relegation zone, Barca boss Luis Enrique showed the Madrid side plenty of respect by naming his strongest side bar at full-back where Jeremy Mathieu and Sergi Roberto replaced Jordi Alba and the suspended Dani Alves.

Rayo were unbeaten in their seven league games themselves and forced Barca ‘keeper Claudio Bravo into a smart early save as the Chilean international flew to his right to turn away Adrian Embarba’s drive.

However, Rayo’s high defensive line was offering plenty of encouragement to the European champions and it seemed only a matter of time before Barca took advantage as Carlos made a good save at his near post to deny Messi.