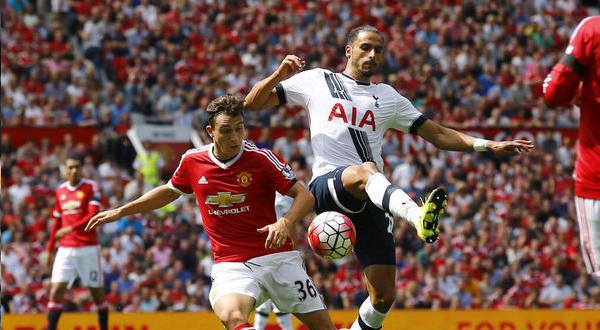 Manchester United earn 1-0 victory against Tottenham in first Premier League clash of the new season, thanks to Kyle Walker’s own goal.

Tottenham started the better but United asserted themselves after the goal. Still, it took 65 minutes before United managed a shot on target via Ashley Young.

It was a game of little excitement and Spurs didn’t do enough after going behind.

Christian Eriksen had Tottenham’s best chance before the own goal, juggling a neat chip from Harry Kane but placing his volley onto the roof of the net.

United gave a run out to five new signings. Memphis Depay was average but the most promising display came from new keeper Sergio Romero, who made a few good saves as Tottenham tried to push back late in the game,.   Romero only joined the team a week ago and played with David De Gea, who apparently wants out of the club, watching from the stands.

“Today was very special because it’s my birthday,” notes van Gaal. “When you lose it’s not a nice day – you can’t laugh anymore!” #mufc