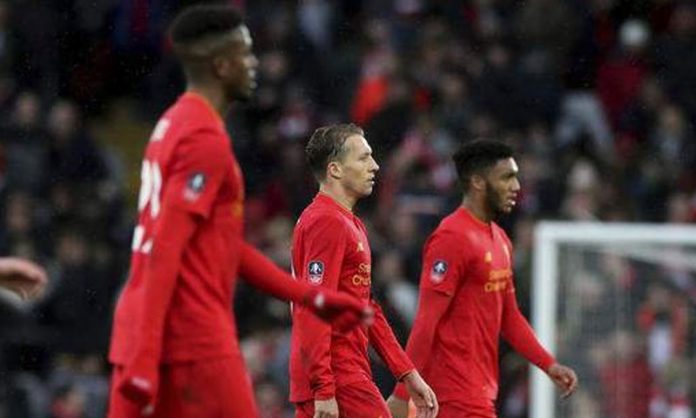 Liverpool were rendered impotent without Mohamed Salah as they were held to a 0-0 draw by Everton in Saturday’s Merseyside derby at Goodison Park.

Egypt winger Salah, the key figure in Liverpool’s impressive campaign, was left out due to a minor groin injury as Jurgen Klopp tried to give his main man a chance to be fit for their decisive Champions League clash against Manchester City on Tuesday.

Danny Ings and Dominic Solanke looked rusty as they were given rare starts, with the latter failing to take either of two early chances.

Roberto Firmino appeared as a late substitute in an attempt to find a winner, but third placed Liverpool had to settle for a point.

They did, though, extend their unbeaten run in Merseyside derbies to 17 matches, as Seamus Coleman and Dominic Calvert-Lewin both failed to take late Everton chances.

Klopp had a big decision to make regarding his team selection, with Liverpool three days away from the second leg of their quarter-final against City following Wednesday’s 3-0 victory

The fact that he made five changes showed where his priorities lie at the moment.

Ings was starting a league match for the first time since Klopp took charge two-and-a-half years ago, having fought back from two cruciate knee ligament injuries, while Solanke was making only his fourth league start for the club.

In addition, Nathaniel Clyne began a match for the first time in 11 months after recovering from a serious back problem, while central defender Ragnar Klavan was pressed into service at left-back, having played just 11 minutes since New Year’s Day.

Inevitably, given those changes, Liverpool did not click as they usually do.

Solanke lacked the kind of sharpness that Salah and Firmino have made second nature.