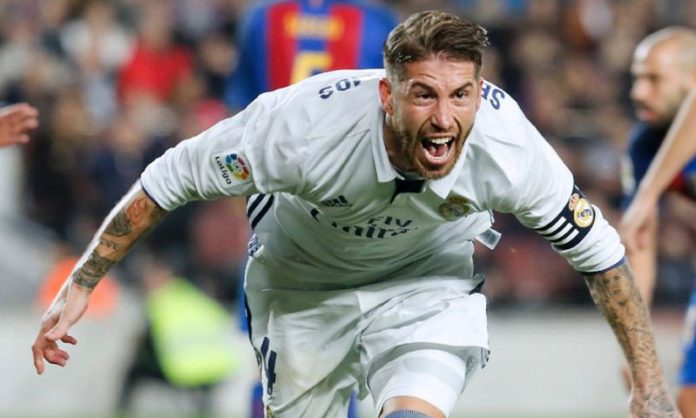 “The team has again showed that we came here to win the game, it wasn’t to be but we got a point,” said Ramos.

“At the end of the day the DNA of Real Madrid obliges you to fight until the end, to always have hope.”

Ramos’s header was a hammer blow for Barca, who have now dropped more points at home already this campaign than they did in the whole of last season.

“It shows that we have done things well since the start of the season, but we can’t go crazy,” added Ramos.

“Six points is just two games. There is a long way to go and Barca and the other teams below will make things very difficult.

“We prefer to rely on ourselves, but neither should we be singing from the rooftops.”

Despite Ramos’s heroics, Madrid’s standout performer was Luka Modric as the Croatian ran the midfield in the opening 45 minutes before Barca markedly improved after the break.

“If we leave it all out on the field, it is very difficult to beat us. We have to do this in every game, not just in the Clasico.”

Suarez awoke from an off colour display to head home Neymar’s free-kick to give Barca the lead.

However, the hosts were left to rue huge missed chances from Neymar and Lionel Messi before Ramos’s late leveller snatched a point.

One piece of positive news for Barcelona, though, was the return of captain Andres Iniesta from injury as the Spanish international put on a virtuoso display as a second-half substitute.

“The feeling could be that we’ve dropped two points, but there is no time to feel sorry for ourselves,” said Iniesta.

“The games come thick and fast and we have to win and hope Madrid slip up.

“Madrid area dangerous team but I think we played well.

“Normally you are left with what comes last and that was Madrid’s equaliser. It was a shame not to have taken our chances at 1-0.”