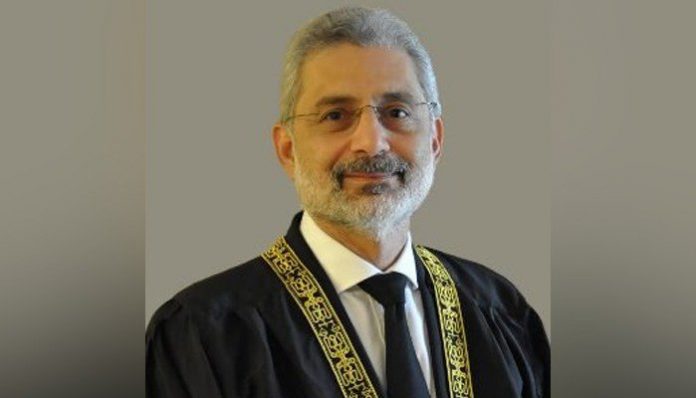 ISLAMABAD: Justice Qazi Faez Isa on Saturday called for a “transparent process” in the appointment of judges to dismiss the “impression that outsiders or extraneous considerations determine who should, or should not, be a judge”.

“Any impression that outsiders or extraneous considerations determine who should, or should not, be a judge must be dispelled. A necessary concomitant to this is a transparent process in the appointment of judges. To unilaterally nominate judges and force through their selection, often times by a single vote, does not accord with the spirit of the Constitution,” said Justice Isa in a nine-page letter he wrote to the chairman and members of the Judicial Commission of Pakistan (JCP).

The chief justice serves as the chairman of the JCP and includes judges of the apex court, the law minister, the attorney general and a member of the Pakistan Bar Council. A copy of the letter was also sent to former chief justices Saqib Nisar and Gulzar Ahmed.

The judge wrote the letter to raise “legitimate concerns” of a few members of the JCP and concerns pointed out by the different lawyer’s associations through various resolutions that were ignored.

Justice Isa urged the JCP to restore the public confidence in the judiciary as without it the decisions of the Supreme Court lack “authority and credibility”.

He added that Justice Naseem Hassan Shah’s belated confession of wrongdoing on television should be commended but noted that it “does not bring back to life a prime minister who on his orders was put to death”.

The judge noted that when “tried and tested longstanding practices” are disposed of then without a substitute then it “encourages those desirous of career progression to cultivate relationships (jobbery); and, when this happens, it is an abomination”.

“A judiciary, perceived by the public not to be independent, lacks public respect and requisite moral authority, and stands diminished,” said Justice Isa.