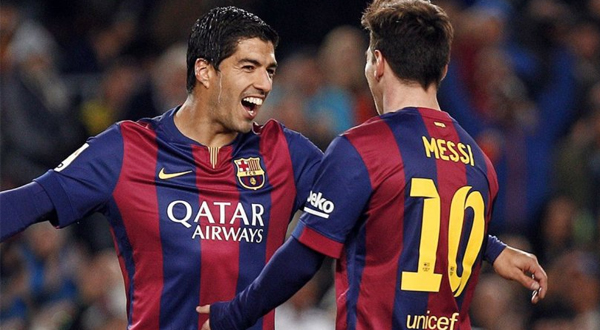 BARCELONA: Lionel Messi and Luis Suarez combined to score one of the classiest penalties in recent times as Messi passed the ball into Suarez’s path for the Uruguayan to complete his hat-trick in a 6-1 rout of Celta Vigo on Sunday.

Barca were already leading 3-1 when Messi – who has missed 17 of 83 penalties in his career — was chopped down inside the area after an outrageous piece of skill on the by-line.

However, instead of handing the spot-kick to Suarez, Messi went one better by rolling the ball into the path of the onrushing former Liverpool striker to slot home.

The goal brought back memories of another Barca legend Johan Cruyff when he and Jesper Olsen played a one-two for the Dutchman to score when playing for Ajax against Helmond Sport in 1982.

French duo Thierry Henry and Robert Pires tried a similar trick without success as they botched a penalty for Arsenal against Manchester City in 2005.

Spanish sports daily AS quickly christened the move as the “penalty of the century.”

And Barca defender Jordi Alba admitted the South American duo had caught even their teammates by surprise.

“Leo always invents things and it was perfect,” said the Spanish international.

“We hadn’t seen it in any training session, we didn’t know anything.”