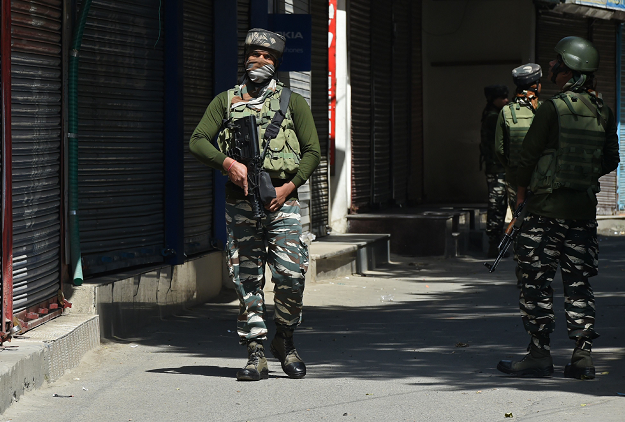 Call for the march was given by the Joint Resistance Leadership against the massacre carried out by Indian forces in Pulwama, on Saturday. Police and paramilitary forces put up barricades in various parts of Srinagar and on roads leading to the army headquarters. Restrictions were especially imposed in Khanyar, Rainawari, Nowhatta, Safakadal, Maharaj Gunj, Ram Munshibagh, Maisuma and Kralkhud areas of Srinagar.

Police arrested Mirwaiz Umar Farooq and Muhammad Yasin Malik when they defied restrictions and tried to lead a march towards Badami Bagh in Srinagar. Mirwaiz and Yasin Malik were arrested along with dozens of their supporters in Nigeen and Gawkadal areas of the city. Police used brute force and fired teargas shells on the protesters. Clashes were reported between protesters and forces’ personnel in Maisuma and other areas of the city.

Police placed the entire Hurriyat leadership including Syed Ali Gilani and Muhammad Ashraf Sehrai either under house arrest or in jails to prevent them from leading the march.

Meanwhile, complete shutdown was observed on the third consecutive day, today, in all districts of the Kashmir valley and in Khari, Bhadarwah, Doda, Thathri, Gandoh, Ramban, Kishtwar, Poonch and others areas of Jammu region. All shops, business establishments, government offices and banks were closed while traffic was off the roads. The authorities suspended mobile internet and train services in the territory.

A protest demonstration organized by APHC-AJK was held outside Indian embassy in Islamabad to condemn the Indian brutalities in occupied Kashmir.

The Organisation of Islamic Cooperation in a statement strongly condemned the killing of innocent Kashmiris in direct shooting by Indian forces at demonstrators in Pulwama area of occupied Kashmir. The OIC called on India to allow a fact-finding mission to visit the occupied territory.

In Bradford, speakers at a conference organized by Jammu and Kashmir Self Determination Movement International asked Britain and other European countries to raise their voice against the killings in Kashmir.