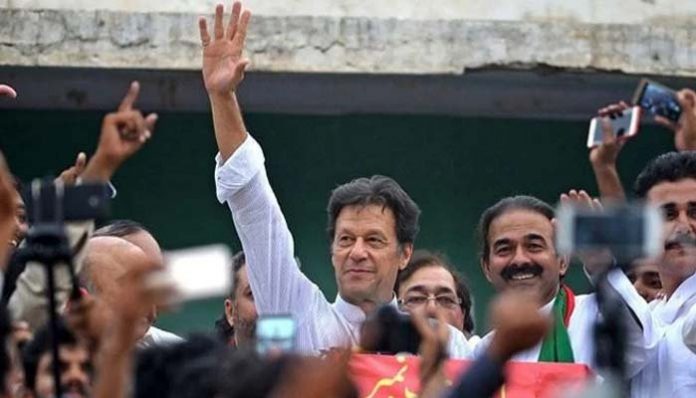 Addressing a rally at the Muzafarabad Cricket Ground in Azad Jammu and Kashmir (AJK) on Thursday, he said that the recent audio leaks had proved that the Sikandar had ‘fixed the [electoral] match’ in collaboration with the Pakistan Muslim League-Nawaz.

“I will leave no stone unturned in sending him to jail,” Imran said, warning that his party would take all possible legal steps against the electoral chief.

He went on to call the Sikandar the ‘chief electoral fraud.’

Reiterating his movement to attain true independence, Imran urged the Kashmiri youth to join his movement. He claimed that the federal government led by the Pakistan Democratic Movement (PDM) coalition had cut the budget for the disputed territory.

“I am preparing myself, so when I call you, be prepared for a real freedom movement,” he said.

Talking about the return of Federal Finance Minister Ishaq Dar after a five-year exile, the former prime minister claimed that Dar was one of the key individuals involved in helping Nawaz Sharif launder money.

He added that Dar had cut a deal to return in a new ‘National Reconciliation Ordinance’ (NRO).

He said that God also says that people should not take a neutral position, either you are with good or with evil.

“Prepare yourself and wait for my call,” he repeated.