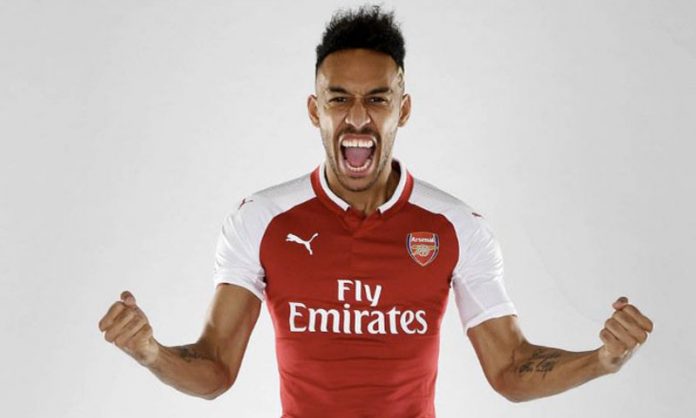 Pierre-Emerick Aubameyang joined Arsenal from Borussia Dortmund for a club record fee of £56 million (63.7 million euros, 79.2 million euros) on Wednesday, in the biggest deal so far on transfer deadline day.

Arsenal boss Arsene Wenger — who last August kept the football world on tenterhooks as he held out selling Alexis Sanchez to Manchester City because he failed to secure Thomas Lemar from Monaco — did not wait until the last minute to land the Gabon striker.

Wenger persuaded the Arsenal board to pay more for the 28-year-old than the £46.5 million they shelled out for Frenchman ALexandre Lacazette last August.

Dortmund have eyed up a six-month loan move for Belgian international Michy Batshuayi from champions Chelsea, who have stipulated there will be no option to buy at the end of that period.

“Pierre-Emerick Aubameyang has joined us from Borussia Dortmund on a long-term contract for a club-record fee,” the statement from Arsenal said.

The club described him as “one of the world’s most highly-rated strikers”.

“He scored 98 goals in 144 Bundesliga games for Dortmund and had a hand in 172 goals in 213 matches in all competitions for his former club,” it continued.

Aubameyang’s arrival should see French veteran Olivier Giroud completing the musical chairs by signing for Chelsea even though Wenger was loathe to let him move to a rival as Sanchez joined Manchester United earlier this month.

However, the French striker is keen to stay in London as he seeks regular first team action to secure his place in France’s World Cup squad.

Aubameyang will alleviate the pressure on Lacazette although he would be ineligible for the Europa League having already played in the Champions League this campaign.

However, Leicester are unlikely to let the 26-year-old — who was a key player in their stunning title success in 2016 and who has returned to form this term after a dip last season — leave for less than £90 million.

City have lost influential Germany winger Leroy Sane for up to seven weeks with an ankle injury and with the club competing on four fronts Guardiola suggested he may require a replacement.

“Right now, it’s the same as (Alexis) Sanchez, it’s not the place to talk about it. It’s so difficult,” City manager Pep Guardiola said on Tuesday when asked about Mahrez.

“If things are not possible, then nothing is going to happen. We don’t have too much and we play every three days. We have to find solutions.”

It’s not just the top clubs involved in the frenetic last few hours of a January that apart from Sanchez becoming the highest-paid player in the league — on a reported pre-tax £500,000 a week — has seen City pay a record fee of £57 million for young French centre-back Aymeric Laporte from Athletic Bilbao.

Tottenham too are getting close to signing Brazilian Lucas Moura, who has fallen out of favour at French giants Paris Saint Germain with the arrivals of Neymar and Kylian Mbappe.

The 25-year-old has according to reports passed his medical and would be the fifth most expensive signing in the club’s history — PSG would like the majority of the £26.5 million fee paid up front.

Those fighting to remain in the cash-rich upper echelon will also get in on the act with Swansea — whose win over Liverpool saw them move out of the bottom three — seeking to bring Ghanaian striker Andre Ayew back to Wales.

The Swans are hoping to sign the 28-year-old for around £18million according to the London Evening Standard — having sold him to the Hammers for £20.5 million in 2016 — but the London side who have only Javier Hernandez as their one fit striker will want to bring in a replacement.

Watford’s long-time servant Troy Deeney could fill the void and is valued at £16 million to leave the club he has been with since 2010.