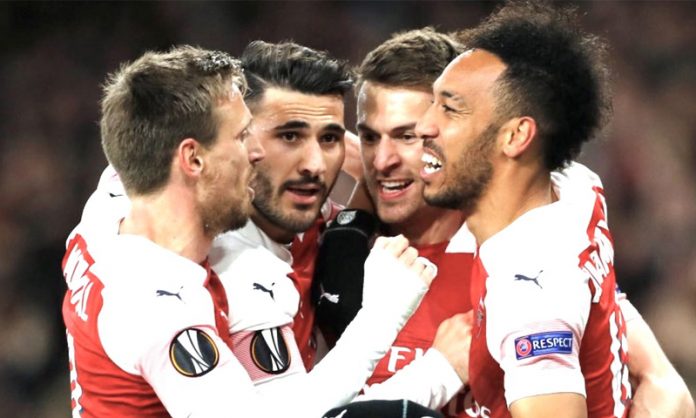 Arsenal and Chelsea closed in on the Europa League last four on Thursday after the Gunners saw off highly-fancied Napoli 2-0 at the Emirates, while Marco Alonso’s late header earned Maurizio Sarri’s side a hard-fought win at Slavia Prague.

Unai Emery’s Arsenal hold a healthy advantage going into next week’s second leg thanks to a fine early strike from Juventus-bound Aaron Ramsey and an unfortunate Kalidou Koulibaly own goal midway through the first half, and can rue missed chances that would have put the tie completely beyond the Italians’ reach.

Chelsea meanwhile escaped from Eden Arena after a bitty display that saw Kepa Arrizabalaga have to make some fine saves to keep the Czechs out before Alonso nodded home Willian’s pinpoint cross four minutes from time to seal a 1-0 win.

The Premier League pair remain on a collision course for the final in Baku, with both sides set to avoid each other if they make it through next week’s second legs.

Arsenal were all over Napoli from the kick-off and got their deserved opener with 14 minutes on the clock, Ramsay waltzing in at the end of a beautiful passing move to calmly stroke home Ainsley Maitland-Niles’s neat lay-off.

Napoli were completely out of sorts, barely able to get the ball out of their own half at times, and 10 minutes later the Gunners doubled their lead.

Former Sampdoria midfielder Lucas Torreira won possession in midfield and charged towards goal before letting off a weak shot that flicked off Koulibaly and flew past a bamboozled Alex Meret in the Napoli goal.

Arsenal should have made more of their first-half dominance over Carlo Ancelotti’s slipshod side, but were not punished by the Serie A outfit, who through Piotr Zielinski should have bagged an away goal to take back to Naples in the second half.