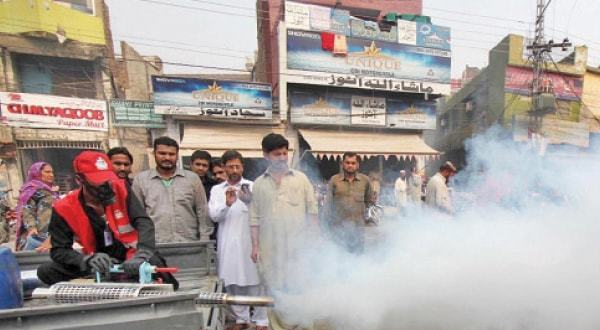 KARACHI: A fumigation drive, launched for the prevention of dengue and malaria, was halted because the Karachi Municipal Corporation (KMC) ran out of fuel.

According to sources, the Karachi Municipal Corporation (KMC) has halted the anti-dengue spray across the city as the civil body ran out of fuel.

Sources told ARY News that the fumigation drive was halted due to non-availability of petrol and diesel for the past four days.

Sources further said that almost 20 litres of diesel and 40 litres of petrol was required per day for conducting the fumigation. They added that the fuel was not being provided by the KMC officials despite complaints.

A day earlier, 254 new cases of dengue virus were reported in Karachi as the provincial capital remained in grip of the mosquito-borne disease.

According to the provincial health department, the majority number of cases in Karachi have been reported in district Korangi, where 112 patients have been infected by the virus during the past 24 hours.