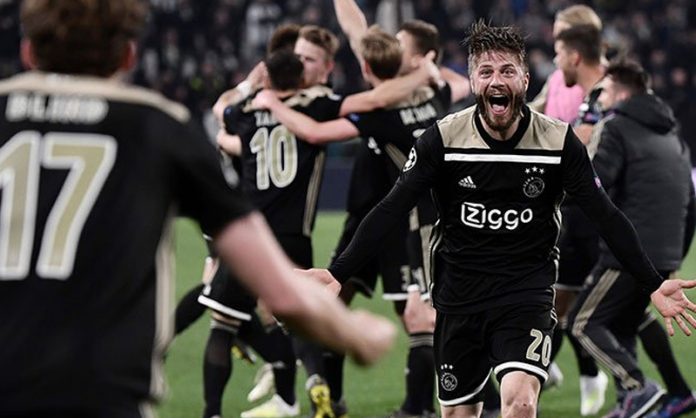 Ajax stunned Juventus to reach the Champions League semi-finals for the first time since 1997 as Matthijs de Ligt’s thumping second-half header secured a 2-1 second-leg victory in the last eight in Turin on Tuesday.

Cristiano Ronaldo, bidding for his sixth Champions League title, scored a 28th-minute header to put Juve ahead after a 1-1 first-leg draw, but Donny van de Beek levelled for Ajax before half-time.

Teenage centre-back De Ligt struck midway through the second period, though, to seal a 3-2 aggregate win and set up a last-four clash with either Manchester City or Tottenham.

The young Dutch side had already eliminated three-time defending champions Real Madrid en route to the quarters, overturning a 2-1 home defeat against the Spanish side with a memorable 4-1 victory at the Santiago Bernabeu.

“It’s an incredible evening for Ajax and its players and also for Dutch football,” said coach Erik ten Hag.

“Once again we eliminated the favourites.

“We said before we were not the favourites but with our philosophy we can go further, we’ve again surpassed our limits.”

Juventus had been looking to reach the Champions League semi-finals for the third time in the past five seasons.

But Ronaldo, who scored an away goal last week with a diving header in Amsterdam, was Juve’s only weapon against the impressive Dutch side.

The 34-year-old was signed for 100 million euros ($117 million) last summer from Real Madrid in a bid to win the European trophy for the first time since 1996, when they beat Ajax in the final.

“We could have done better, but Ajax aren’t coming out of nowhere, they were Europa League finalists two years ago and scored five goals against Real.

“It’s not our worst elimination. We had big expectations, but the Champions League is a strange competition. You have to arrive in peak condition.

“In the last month we have been struggling with several injuries. Even tonight we were missing important players.”