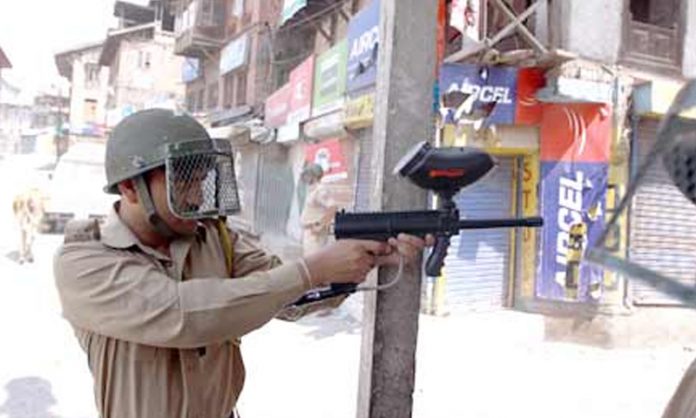 In occupied Kashmir, a study conducted by the Department of Psychiatry of Government Medical College (GMC), Srinagar, has revealed that 85 % of pellet victims were diagnosed with a psychiatric disorder.

The study found that the majority of the pellet injured (68.4%) had suffered eye injury. Less than half (42.37%) of them had suffered grievous injury in the eyes. 92.92% of the patients with eye injuries were diagnosed with a psychiatric disorder, as compared to 70% patients with other than eye injury.

The hospital-based cross-sectional research was conducted over a period of two years, involving 380 pellet injury victims from Orthopaedics and Ophthalmology departments of GMC Srinagar. “All patients underwent detailed psychiatric screening based on Mini-International Neuropsychiatric Interview (MINI plus and MINI-kid). Diagnostic and Statistical Manual (DSM-5) was applied to confirm the diagnosis,” it said.

The study said that psychiatric morbidity was found in pellet injured victims proportional to severity and site of the injury.

The study was authored by Dr Saleem Yousuf.

Pellet guns were introduced by the Indian authorities in occupied Kashmir in 2010 to quell anti-India protests. The gun fires a cluster of small, round-shaped pellets with high velocity which do not have a predictable trajectory and can cause severe injuries.