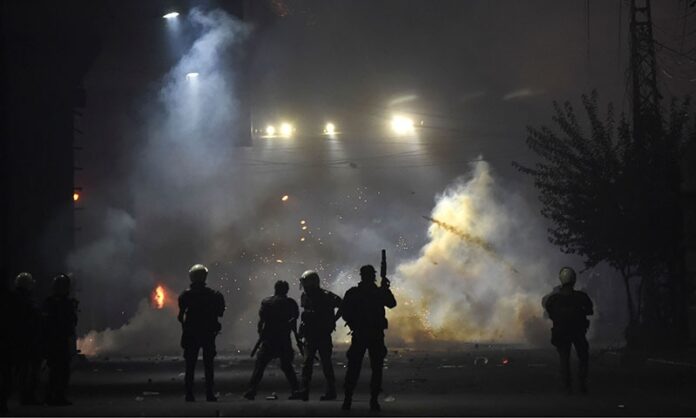 LAHORE: Life in Lahore is at standstill. Shops, markets educational institutions are closed. While the entire Lahore is wearing a deserted look city’s several key streets leading to the motorway are echoed with sound of firing rubber bullets, tear gas shells by police and slogans by workers of banned Tehreek-e-Labbaik Pakistan.

Social media abuzz with pictures showing violent clashes between police and TLP activists. At least three cops have so far martyred and several injured while attempting to prevent protesters march towards Islamabad, on the instructions of their top boss, who was having a good time in Dubai till this morning when his boss (PM) called him back. Interior Minister Sheikh Rasheed was more interested in watching Pak-India cricket clash than handling the ongoing clashes between his frontline law enforcers (police) and TLP workers.

On the other hand, opposition parties have also started countrywide anti-government protests amid surging inflation.

All this happening when Prime Minister Imran Khan is set to leave today for Saudi Arabia on a two-day visit and Information Minister Fawad Chaudhry is already in Dubai.

The grave law and order situation seems to fail to draw due attention of the quarters concerned. Here questions arise that who will handle the possible law and order crisis in the country? Is it being left deliberately for Rawalpindi to tackle? Or the Islamabad is ‘unaware of severity’ the issue.

Speculation is rife over the future of the PTI-led government, after a delay in issuing notification on appointment of new DG ISI by the PM House.

Political pundits accuse top decision makers in Islamabad for ‘scapegoating police’ to handle the crisis created by none other than they themselves.

The prevailing situation may badly demoralize police to control march by TLP and protests by PDM across the country.

Decision makers in the capital need to sit together and find out a peaceful solution of the crisis-like situation.