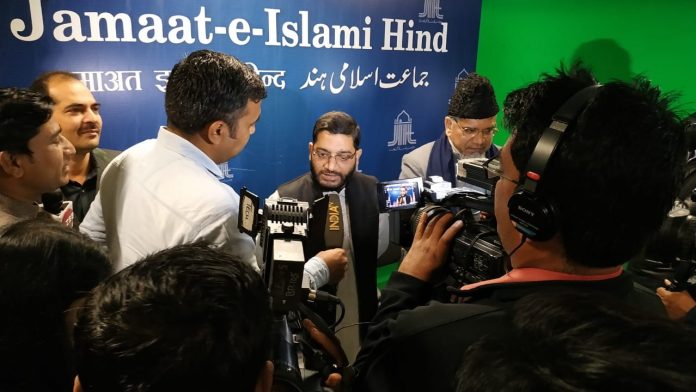 Syed Sadatullah Husseini, the JIH Ameer demanded an independent judicial inquiry into the violent attacks on the protests against the Citizenship Amendment Act in Uttar Pradesh.

He was speaking at a press conference at the Jamaat headquarters here.

He also condemned the violence and high handedness of the Uttar Pradesh Police on its citizens in the name of controlling the anti-CAA protests. Jamat will provide all kind of assistance to the victims of the violence. “Since there are allegations on both sides an independent judicial inquiry will only make things clear, ” he added.

Mr Hussaini also expressed his disappointment over the insensitive reaction of the Central government to the countrywide protest against CAA. He said the organisation will continue to support all peaceful protests against CAA across the country. When asked about the usage of religious slogans in the protest marches, he replied that the constitution of this country gives every citizen of this country the very right to assert their religious identity and said that raising religious slogans are democratic until and unless they are provocative and forced upon others.

He also reiterated that this is not the fight of a sole community but of the whole people of India to defend the Constitution and uphold the secular values of this country.

The organisation also condemned the violence around the religious site of the Sikh Community- the Nankana Sahib Gurudwara in Pakistan. “We hope this issue is resolved at the earliest and any further escalation is prevented by timely action,” said in the statement released by the organisation.

In his reply to a question on PFI ban, Mr Husaini said banning an organisation only for the sole reason of participation in protests is undemocratic and condemnable.