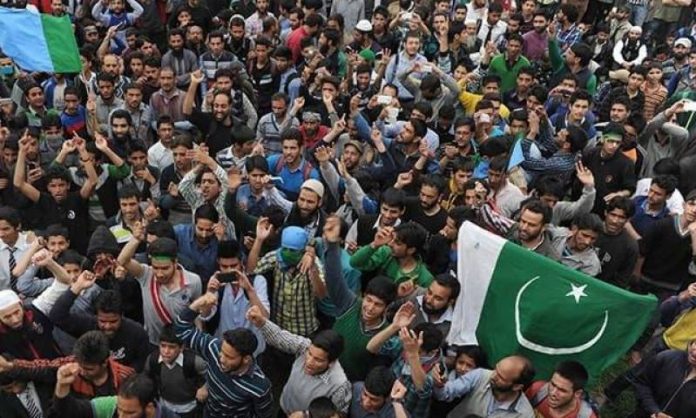 In occupied Kashmir, amid complete shutdown, a protest demonstration was held in Sumbal town of Bandipora district, today, against the arrest of a youth by Delhi Police.

The youth, Hilal Ahmed Butt, a resident of Wani Mohalla in north Kashmir’s Sumbal town, was arrested by the Special Cell of the Delhi Police, last week.

“A team of Delhi police’s Special Cell along with Sumbal police and a unit of Indian army on January 23 picked up Hilal from his home and shifted him to Delhi without letting us know the reason of his arrest,” said a relative of Hilal. He said they assured us that he will be released soon after questioning but on contrary to that he was shifted to Delhi without our knowledge.

Following a call issued by the Traders’ federation and taxi drivers’ association, complete shutdown was observed in Sumbal against Hilal’s arrest. Traffic was off the road and all shops and business establishments remained closed in the town.

Scores of people along with the family members of Hilal also staged a protest at main chowk Sumbal and held protest march. Demanding his immediate release, the protesters said that Hilal was innocent.

Following the incident, people took to the streets and blocked Sopore-Kupwara road as a mark of protest against the killing of the officer. The reports said that police fired teargas shells to disperse the protesters.