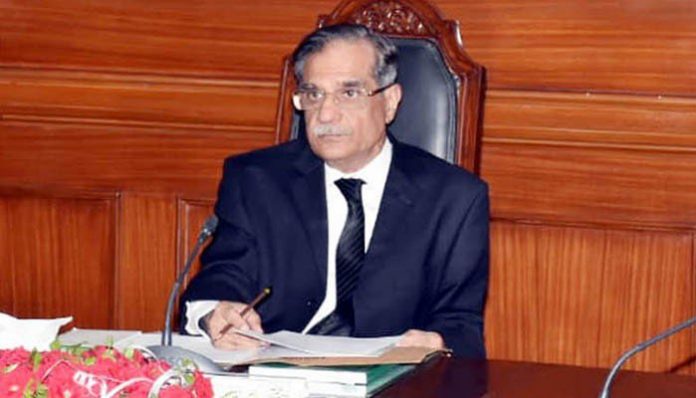 Chief Justice Saqib Nisar has proposed reintroduction of tax on pre-paid mobile phone cards in an effort to raise funds for the Diamer-Bhasha and Mohmand dams.

However, the chief justice said that the tax would be imposed only if the people of the country support the move and urged people to weigh in on the issue.

During a fundraiser hosted by UK-Pakistan Chamber of Commerce and Industry in London, the chief justice said overseas Pakistanis are always the first ones to help the nation during difficult times.

“It will not be appropriate to impose taxes to collect funds for the construction of dams, however, we had earlier suspended the withholding tax on the top-up of prepaid cards by network service providers and learnt that through this measure, Rs3 billion were saved per month.”

“If the nation allows, then we will re-impose the tax on the top-up of prepaid cards and collect money for the dam fund,” the top-court judge added.

The CJP also spoke about the water crisis currently being faced by the people of Karachi, Lahore and Quetta and said the water mafia was responsible for the shortage.

Putting emphasis on the construction of Kalabagh Dam, he said that the only reason the plans failed is due to the disagreement between the provinces.

“I will safeguard every penny donated to the dam fund.”

“These funds are a loan from the nation and I will hand them over to a trustworthy man before leaving,” he added.

The estimated cost for the construction of Diamer-Bhasha and Mohmand dams is $14 billion.

Justice Nisar said that he does not wish to impose additional taxes on the people of Pakistan, who are already facing an economic plight and the re-imposition of the tax on prepaid mobile phone cards is only a proposal.