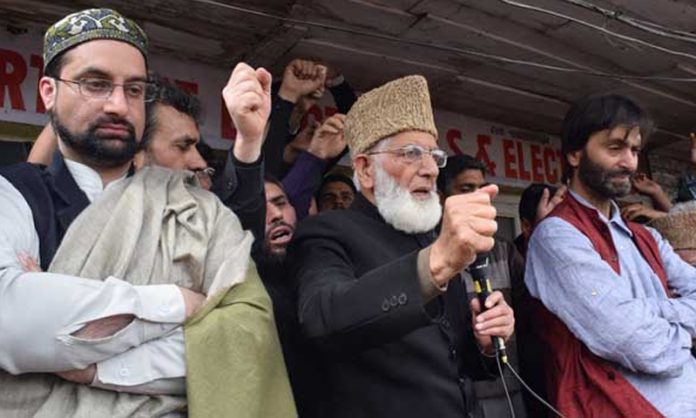 In occupied Kashmir, Hurriyat leaders and organizations have condemned the killing of a civilian and a teenage girl by Indian forces in Badgam and Kulgam districts.

The civilian, Ishfaq Ahmad Ganai, who was injured in firing by troops at Chattergam area of Budgam district on Friday succumbed at Soura hospital in Srinagar, the other day. While, the 14-year-old girl, Muskan Jan, was hit at her home at Wangud-Qaimoh in Kulgam during indiscriminate firing the dame and breathed her last at a Srinagar hospital, yesterday.

Tehreek-e-Hurriyat (TeH) Chairman, Muhammad Ashraf Sehrai in a statement issued in Srinagar expressed profound grief and shock over the killings. “The trigger-happy forces have once again proved that they could kill at their will as they continue to enjoy impunity under draconian laws like Armed Forces Special Powers Act (AFSPA),” Sehrai added.

The Chairman of Jammu and Kashmir Liberation Front, Muhammad Yasin Malik in a message from jail said, “Ishfaq and Muskan were fired upon and killed with impunity by trigger happy forces.” He said the ongoing killing spree by forces is the worst kind of savagery. “When a person equipped with arms and ammunition is given immunity and legal shield and ordered to kill anyone coming his way, he is bound to turn into a killing machine,” Malik said.

The Jamaat-e-Islami of occupied Kashmir said, “Ishfaq Ahmad was killed by unruly forces personnel without any justification while he was driving his scooter on Chatergam-Gowharpora road near Zenipora crossing. Several bullets were fired upon him. The bullets ruptured his skull, causing his death soon thereafter.” The statement added that the youth was a carpenter by profession and was survived by his wife and two children. The Jamaat demanded a high-level probe by some impartial judicial agency.

A spokesman for High Court Bar Association while condemning the killing of Muskan and Ishfaq Ahmed expressed concern over the reign of terror let loose by the Indian forces in Kashmir.

The Jammu and Kashmir Democratic Freedom Party (DFP), Jammu and Kashmir Salvation Movement, Jammu Kashmir National Front and Muslim League in their separate statements appealed the international community to intervene and use their influence to stop the ongoing killing spree in Kashmir.