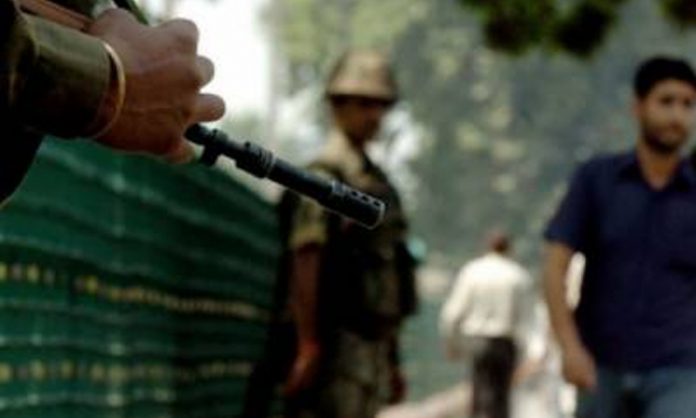 Srinagar : In occupied Kashmir, Indian troops in their fresh act of state terrorism martyred three youth during a cordon and search operation in Srinagar, today.

The youth were killed by Indian troops in Fateh Kadal area of the city. The killed youth were identified as Raees Ahmad, Merajuddin Bangroo and Faid Mushtaq Waza. Soon after the killings, the authorities rushed to close all educational institutions and suspend internet services in a bid to prevent protests.

However, on receiving the news about the fresh killings, the students of Islamic University of Science and Technology boycotted the class work and came out of the university premises and held a protest demonstration at Awantipora in Pulwama . The protesting students while raising anti-India and pro-freedom slogans marched on the Srinagar-Jammu highway and blocked the road for hours.

Meanwhile, several journalists were brutally thrashed by Indian troops while they were performing professional duties during the cordon and search operation in Fateh Kadal area of the city. Kashmir Press Club and Kashmir Editors Guild in their separate statements strongly condemned the troops’ action against journalists.

The Joint Resistance Leadership in a statement issued in Srinagar, today, called for a protest shutdown, tomorrow, against the killings, arbitrary arrests, destruction of houses, harassment of students and attack on journalists by Indian forces in the territory. The leadership comprising Syed Ali Gilani, Mirwaiz Umar Farooq and Muhammad Yasin Malik expressed deep anguish over the Srinagar killings. About fourth and final phase of local bodies’ elections, the leaders said that the rejection of election ploy by more than 95 percent people was a clear indication that the Kashmiris had been completely alienated from India. They asked New Delhi to accept the fact and work for resolution of the dispute as per people’s aspirations.

Senior APHC leader and Tehreek-e-Hurriyat Jammu and Kashmir Chairman, Muhammad Ashraf Sehrai in a statement in Srinagar, today, said that India had failed in competing Hurriyat leadership at political front and hence resorted to revengeful tactics against them. He denounced the authorities for invoking draconian law, Public Safety Act against Hurriyat activists and shifting them to Jammu jails.

On the other hand, a policeman was killed and six others including a Deputy Superintendent Police were injured in two different attacks in Srinagar and Pattan, today.