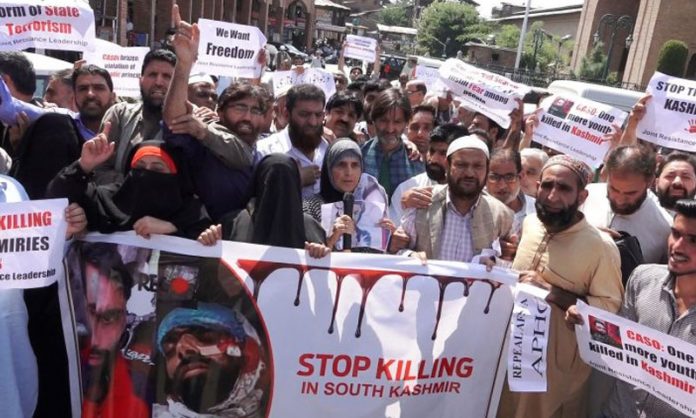 In occupied Kashmir, the Joint Resistance Leadership held a protest demonstration in Srinagar, today, against the killing of a civilian youth, Fayaz Ahmad Wani, in firing by Indian troops in Pulwama district.

Fayaz Wani was killed in indiscriminate firing by the troops in Chew Kalan area of Pulwama district, yesterday.

The killing of the civilian led to complete shutdown in Pulwama district, today. All shops, business establishments, government offices and educational institutions were closed while traffic was off the road. The authorities suspended train services between Srinagar and Banihal.

Meanwhile, the Joint Resistance Leadership in a statement issued in Srinagar appealed to the people to boycott the upcoming local bodies and panchayat elections as these polls were aimed at diluting the disputed status of Jammu and Kashmir.

Indian troops assaulted civilians, beat them up and vandalized houses and private property including vehicles in Imam Sahib area of Shopian district. The locals told media that the troops entered the village in the dead of night between Monday and Tuesday and subjected residents to torture without any provocation.

The family members of illegally detained prominent Kashmiri public figure, Sarjan Barkati, along with dozens of relatives and neighbours, today, staged protest at press colony in Srinagar against his continued detention. They demanded his immediate release.

In a bid to advance BJP’s plan to evict the Kashmiri Muslims from Jammu region, the authorities have decided to demolish a housing colony near Jammu city. Thousands of Muslims from the Kashmir Valley settled in two hundred houses in Bashir Gujjar Basti of the Jammu region have been served notices to vacate the colony so that it could be demolished.

The International Federation of Journalists in a statement issued in Brussels, today, condemned the arrest of Kashmiri journalist Aasif Sultan. The IFJ said the situation for journalists in Kashmir remains grim adding that the arrest and charge against Asif Sultan was deplorable and unacceptable.

Speakers at a seminar on “Kashmir: Tale of Subjugation & Resistance”, which was held in Houston, Texas, urged both the United Nations and the United States to stop the carnage unleashed by the Indian forces in Kashmir. Prominent among those who addressed the event included Dr Ghulam Nabi Fai and Dr Ghulam Nabi Mir. The seminar was organized by Islamic Society of North America.