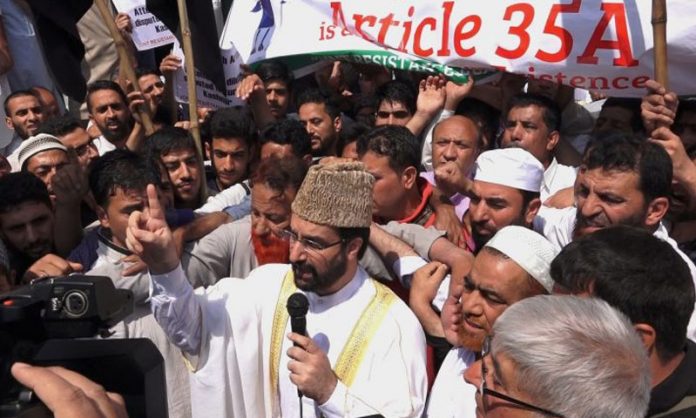 In occupied Kashmir, people held massive demonstrations in Srinagar and other major towns, today, to protest against assault on Article 35-A of the Indian Constitution that grants special rights and privileges to the permanent residents of Jammu and Kashmir and bars the non-Kashmiris from permanently settling in the territory.

Call for the demonstrations was given by the trade bodies and civil society organizations to express resentment against BJP government’s attempts to abrogate the Article 35-A. A petition seeking repeal of the Article 35-A is listed for hearing in the Indian Supreme Court on 6th August. The repeal of this constitutional provision is aimed at converting the Muslim majority of Jammu and Kashmir into minority by paving way for the non-Muslim Indian citizens to settle in the territory.

Indian police subjected the protesters to brute force at different places. People also staged protests in Mandi area of Poonch district in Jammu region against the onslaught on Article 35-A. Hurriyat leaders, Shabbir Ahmed Dar, Muhammad Iqbal Mir, Muhammad Ahsan Untoo, Imtiaz Ahmed Reshi, Ghulam Nabi War and Ghulam Nabi Waseem in a joint statement said that the people of Jammu and Kashmir would resist any attempt to abrogate the Article 35-A tooth and nail.

Members of Jammu and Kashmir Civil Society Coordination Committee, Mir Javaid Advocate, Mufti Nasir-ul-Islam and Jagmohan Singh Raina, have submitted an application in the Indian Supreme Court seeking dismissal of the petition filed for abrogation of Article 35-A. In the meantime, more than 300 Lawyers of Jammu unanimously passed a resolution at a meeting in Jammu for strengthening and retention of Article 35-A.

Meanwhile, Indian troops in their fresh act of state terrorism martyred two more youth during a cordon and search operation in Drusoo area of Sopore, today. Earlier, one Indian soldier was killed while a policeman was injured in an attack in the same area.

An Indian soldier and a policeman were injured in a grenade attack in Islamabad town, today. Complete shutdown was observed in different areas of Kupwara and Baramulla districts against the killings. Despite restrictions, thousands of people participated in the funeral prayers of a martyred youth, Bilal Ahmed, at his ancestral Shatmuqam village in Lolab area of Kupwara district, today.